Sodi Kart steals the show with three victories off Sherrat, Jones and French 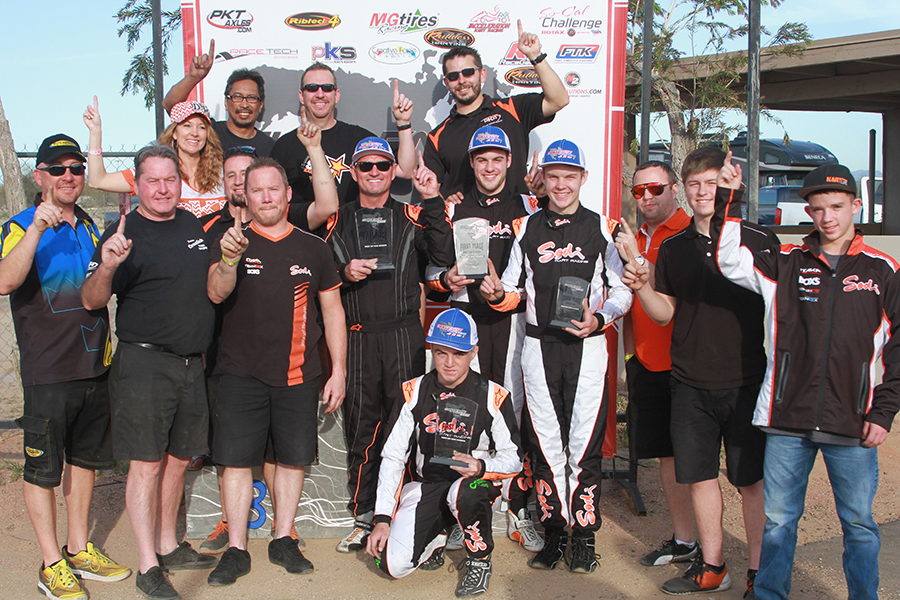 The final day at the Phoenix Kart Racing Association for stop two of the Challenge of the Americas was another action-packed day as the second half of the six-round championship series began. Seven categories battled around the 7/10-mile facility over the weekend, completing Round Four on Sunday. The championship picture has been painted now as the program heads to Sonoma for the finale weekend on April 1-3. Today however was a stunning show by Sodi Kart operation under the Dallas Karting Complex stable, taking home three of the victories. EKN would like to wish Michael Michoff, who was involved in a flip Sunday during the Senior Max main event, a speedy recovery from his injuries sustained, including spleen surgery. 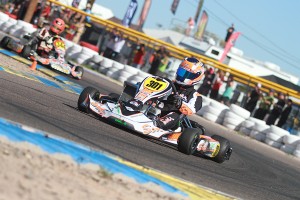 It was a wild weekend in the Senior Max division, and Sunday’s action put the final touches on its unpredictability. Canadian Coltin McCaughan (Rolison Performance Group / Kosmic) set the pace throughout the day, earning fast time in qualifying and leading wire-to-wire in the Prefinal. South African Jordan Sherrat, who finished third at the Rotax Grand Finals in 2015, won the battle for second and challenged McCaughan on the opening lap of the main event. Sherrat attempted to pass the Canadian in the ‘Daytona’ turn 10, and spun sideways. He came to rest at the apex of the corner, with the rest of the field diving into the turn. Michael Michoff was the first to clip Sherrat’s Patrick Flynn Motorsports / Sodi Kart, and went over. It brought out a red flag, with the entire field sent back to pit lane for repairs. Michoff was the only driver not to return, and the 25-lap battle began. Sherrat got the jump at the drop of the green and McCaughan was settling in until lap five when his powerplant died heading down the straightaway. This put Nathan Adds into second, making it a 1-2 for Sodi Kart. Christian Brooks (CRG) broke up the duo, taking over the second position. Running fast laps, Brooks was unable to close in on the South African, settling for the second step of the podium with Sherrat stealing the victory. Adds held off a charging Jim McKinney (Rolison Performance Group / Kosmic) for the third step of the podium with Kellen Ritter (Rolison Performance Group / Kosmic) earning the fifth spot. 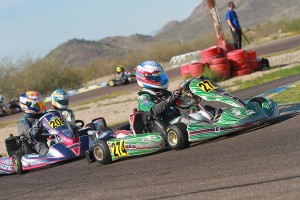 Of all the championship leaders, Nick Brueckner is the only driver to lead every session of the Challenge after four rounds. The Orsolon Racing / Tony Kart driver kept his perfect score going after sweeping the action on Sunday, but not without a challenge. Nick clocked in the fast time in qualifying and came under attack in the Prefinal. After dropping back a few positions, he worked his way back to the point and the race win. It was a similar feat in the main event, falling to third before racing his way back to the lead. Brueckner led the remaining laps, scoring his fourth straight victory. Hannah Greenemeier (Rolison Performance Group / Kosmic) emerged as the top challenger, earning her first runner-up result in the Junior division while stealing the fast lap bonus. Matthew Taskinen (Rolison Performance Group / Kosmic) recorded his fourth straight podium finish with a third-place result over Zoey Edenholm (Koene USA / Tony Kart) and Max Fedler (Unser Racing / Tony Kart). 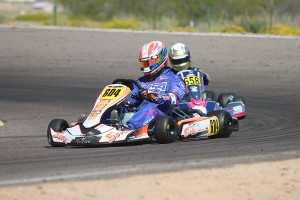 Mike Jones maintained the championship lead with a second victory on the weekend (Photo: EKN)

There is no doubt as to who controls the championship chase in the Masters Max division after the performance put in by Mike Jones on the weekend. The Dallas Karting Complex co-owner was the first victory on the day for Sodi Kart, sweeping the category. Jones was unstoppable, posting fast lap in qualifying before winning the Prefinal, and leading all 25 laps in the main event. Billy Cleavelin (Rolison Performance Group / Kosmic) became the top challenger, unable to run down the point leader to clinch his best finish of the season. Paul Bonilla (Full Throttle Karting / BirelART) beat out Scott Falcone (Rolison Performance Group / Kosmic) for the third step on the podium, while David Pergande (Full Throttle Karting / Tony Kart) wrapped up his best weekend at the series with a fifth place performance. 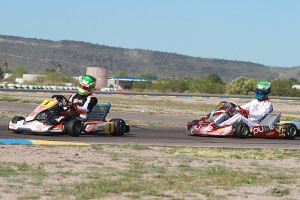 Championships are not always earned in the final round, however, Jake French helped his cause with a third victory in four rounds of racing on Sunday. The Dallas Karting Complex / Sodi Kart driver gave the operation its third victory of the day, thanks to zero mistakes in the main event. Saturday winner Kolton Griffin (Pure Karting / Tony Kart) set fast time in qualifying and worked by French for the win in the Prefinal. Griffin was unable to get a better launch off the starting grid, as French took over the lead on the opening circuit. Kolton hounded the Texan, waiting for any mistakes. None was made and French took his third win of the season. Griffin settled for second with Jacob Neal (VRP / Tony Kart) earning an impressive third step on the podium over Harold Gottacker IV (Champion Racing / Intrepid) and Kol Bailey (Pure Karting / Tony Kart). 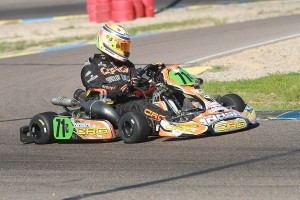 The score is now even at two apiece between Darren Elliott and Ryan Kinnear. Elliott match the win total set by Kinnear in Tucson, as Elliott made it two for two in Phoenix. Elliott (Nash Motorsportz / CRG) got the edge in qualifying before Kinnear (Champion Racing / Intrepid) won the Prefinal. A great start by Elliott put him out front of Kinnear, sandwiching a few Senior Shifter pilots in between. From there, it was all Elliott as he landed win number two of the weekend. Kinnear settled for second with Nick Firestone (DR Kart) earning his third podium finish in four races. 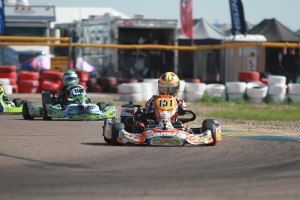 Canadian Marco Kacic (CRG) earned his third victory of the season, keeping himself the driver to beat in the championship chase. Qualifying was a busy session as Joe Brienza II (CRG) stole the fast time late in the run, leading the field to the green flag. It was short-lived, getting shuffled off track in the opening corner. A heated fight raged on for the laps that followed with Kacic taking the win. The pole position gave Kacic a clear run to the victory in the Final, leading all 18 laps for the checkered flag. Saturday winner Austin Torgerson (Tony Kart) won the battle for second with Dustin Salaverria (CRG) coming from the tail of the field to third over Ashton Torgerson (Tony Kart) and Cooper Becklin (BirelART). 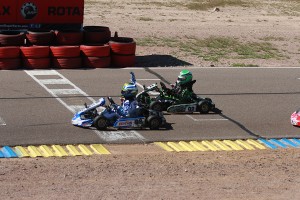 The streak for Ashton Torgerson (Tony Kart) came to a close today with Carson Morgan (Benik) racing his way to victory. Torgerson was the top qualifier but fell victim to contact between he and Morgan in the Prefinal. Morgan crossed the line first, but was penalized down to fourth, handing the win over to Aden Rudolph (BirelART). The opening lap went south for the former PKRA regular, with both Torgerson and Morgan around after the opening few laps. The three pulled away from the rest of the field, with the point leader and Morgan swapping the lead numerous times all with Rudolph there waiting. Rudolph was able to take the lead as they took the white flag after the two others drifted wide at turn 11. Morgan and Torgerson drafted past Rudolph down the final straight, with Carson able to hang on for his first series victory. Toregerson and Rudolph joined him on the podium as Brock Boyse (Benik) and Tuesday Calderwood (Tony Kart) completed the top-five.