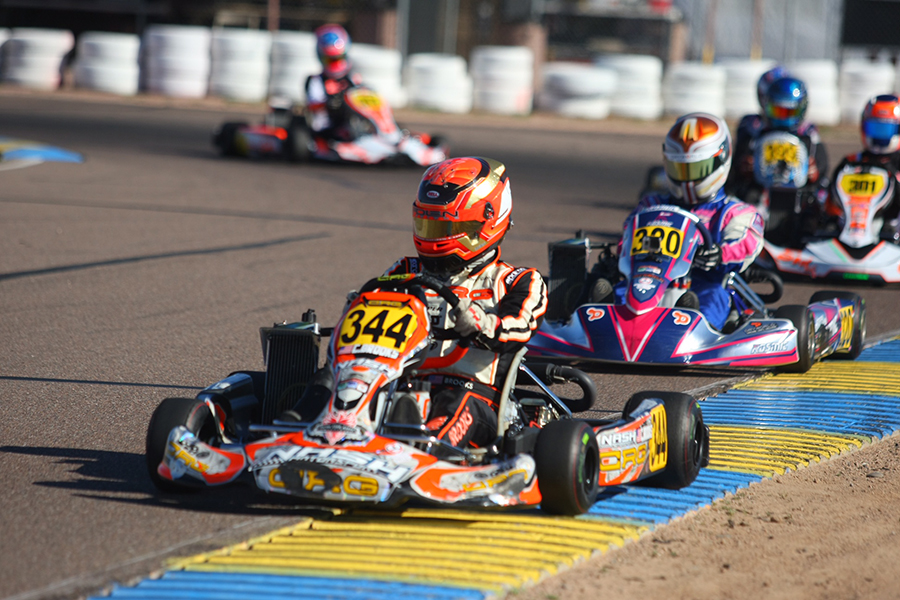 It was picture perfect day at the Phoenix Kart Racing Association for the third round of the Challenge of the Americas. The Glendale, Arizona area reached high temperatures in the 80s, with clear blue skies providing the backdrop for the seven categories competing to complete the first half of the championship fight. The racing was clean but intense as driver attempted to extend their lead, or close in on the championship leader with a solid day of racing.

The Senior Max division continued its unpredictability throughout out Round Three. Senior rookie Kellen Ritter (Rolison Performance Group / Kosmic) set the fast lap in qualifying, however, lost the Prefinal to visiting South African driver Jordan Sherrat (Patrick Flynn Motorsports / Sodi Kart). Sherrat, the third place finisher at the 2015 Rotax Grand Finals in Portugal, grabbed the jump at the drop of the green flag and pulled away to the Prefinal win. The 25-lap Final was more exciting and action-packed. Sherrat was under attack early with point leader Jim McKinney (Rolison Performance Group / Kosmic) on the attack. McKinney took over the lead on lap six, but it was short-lived as they fought for the same piece of real-estate in turn two. Contact was made and McKinney got the worst of it, spinning off in the dirt. Sherrat was able to maintain the lead, but had a host of drivers behind him. It was an epic first half of the race with drivers making moves at nearly every turn.

Among them was Round Two winner Christian Brooks. The Nash Motorsportz / CRG pilot suffered electrical issues in qualifying and flat tire in the Prefinal to drop him at the back of the grid for the main event. Quick early, Brooks was into the top-five by lap eight. Lap 11, Brooks had found himself in the second position and began working over Sherrat for the lead. He pulled the trigger on lap 19, taking over the position and bringing Coltin McCaughan (Rolison Performance Group / Kosmic) with him. Brooks continued running the fast laps of the race, inching away to score a second straight victory. The Canadian drove to second with Sherrat crossing in third. Sherrat was penalized 10-seconds for contact, thus moving him back to 10th and moving Ritter up to third, duplicating the Round Two podium. Michael Michoff (Rolison Performance Group / Kosmic) ran fourth with Nathan Adds (Dallas Karting Complex / Sodi Kart) fifth. 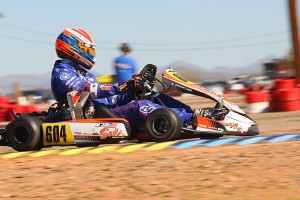 Mike Jones extended his point lead in Masters Max with his first victory of the season (Photo: SeanBuur.com)

Coming into the weekend, Mike Jones assumed the point lead with the withdraw of John Crow and the events that unfolded in Tucson. Jones (Dallas Karting Complex / Sodi Kart) took the top honors in the final practice on Friday, but found himself chasing top qualifier Paul Bonilla (Full Throttle Karting / BirelART) and Prefinal winner Scott Falcone (Rolison Performance Group / Kosmic) during the day. Contact in the Prefinal while trying to work past Bonilla dropped him to third in the race, starting inside row two. The three led the field to the green flag slotting into place. Jones was quick on the charge, moving to second and two laps later, moving into the lead. As Bonilla dropped to third, he came under attack from Billy Cleavelin (Rolison Performance Group / Kosmic). The two made contact, sending Bonilla around and toward the tail of the field. This left Jones and Falcon out front, with the championship leader Jones driving away to a four-second advantage for his first win of the season. Falcone ran second, however, was removed from the results for a clutch infraction in tech. Cleavelin crossed the line third, however, the contact was penalized for the contact. The 10-second penalty put him behind David Pergande (Full Throttle Karting / Tony Kart), but still on the podium. Bonilla drove his way back up to be classified fourth, moving ahead of a returning Justin Peck (Rolison Performance Group / Kosmic). 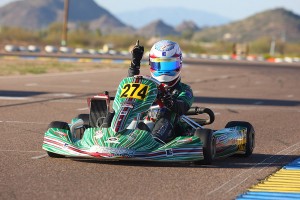 Saturday was a near duplicate of the two rounds in Tucson for championship leader Nick Brueckner. The Texas driver was at the top of the results sheet for all three sessions, piloting his Orsolon Racing / Tony Kart to fast lap in qualifying and winning the Prefinal. Brueckner came under pressure early on in the main event, but his machine came in after six laps. Retaking the lead, Nick pulled away with the lead and ran consistent laps to maintain the advantage to the checkered flag for his third straight victory. Matthew Taskinen (Rolison Performance Group / Kosmic) fought his way to second for his third straight podium result. Hannah Greenemeier (Rolison Performance Group / Kosmic) posted fast lap in the main event to keep Brueckner from earning a perfect score on the day, as the Colorado native landed her first podium in Junior competition. Payton Durrant (Koene USA / Tony Kart) was in the fight early but dropped to fourth with Shawn Harmon (Kosmic) in fifth. 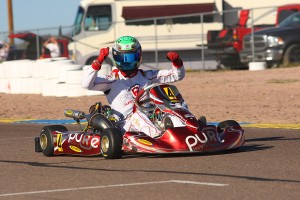 The streak in Senior Shifter came to an end Saturday with Kolton Griffin defending his home track. The Pure Karting / Tony Kart pilot set fast time in qualifying, only to lose in the Prefinal to a holeshot win by point leader and Tucson sweeper Jake French (Dallas Karting Complex / Sodi Kart). French grabbed the holeshot again to begin the Final, with Griffin on his bumper. The Phoenix driver took over the lead on lap nine, and never looked back as he pulled out to a four-second advantage. French finished second, holding off a late charge by Harry Gottsacker IV (Champion Racing / Intrepid). 2015 DD2 series champion Sabre Cook (Energy Kart USA) ran fourth in her season debut with Hunter Pickett (Aluminos) placing fifth after a heated battle for the position. 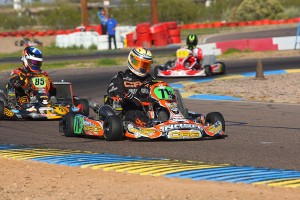 The drama continued in the Masters Shifter division, this time with Darren Elliott earning his first series victory. The veteran pilot under the Nash Motorsportz / CRG tent set fast time in qualifying and led the Prefinal until a broken chain put him on the sidelines. That gave point leader and Tucson double-winner Ryan Kinnear (Champion Racing / Intrepid) the win. The two matched up in the main event, with Elliott able to track down Kinnear for the lead, and hold on for the victory. Kinnear and Juan Garcia (CRG) completed the podium with Lonnie Hochstetler (CRG) and Nick Firestone (DR Kart) rounding out the top-five. 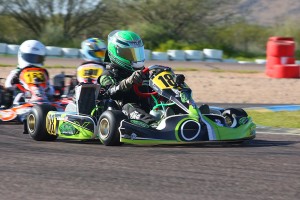 The championship chase in the Mini Max division took a new turn with the results from Saturday. Championship leader Marco Kacic (Nash Motorsportz / CRG) set the pace with fast time in qualifying, only to finish second behind Dustin Salaverria (Nash Motorsportz / CRG). The front of the field changed face at the start of the main event with an incident involving Kacic, Diego LaRoque (Tony Kart) and Joe Brienza II (CRG). Austin Torgerson (Ruthless Karting / Tony Kart) was the benefactor, taking over the lead with Salaverria and Cooper Becklin (Go Kart Hero / BirelART) trailing. Salaverria put on the pressure late, taking over the lead as the white flag came out. Torgerson attacked at the turn eight hairpin, retaking the lead. He held on to cross the line first at the checkered flag for his first victory in the category. Salaverria earned his first series podium with runner-up as did Becklin in third. Corbyn Andrews (Tony Kart) and Ashton Torgerson (Ruthless Karting / Tony Kart) doing double duty for a second top-five finish on the day. 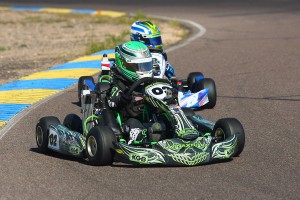 Ashton Torgerson made it three straight victories with another sweep Saturday in Phoenix. The day was not an easy one with pressure from Carson Morgan (Benik) and Aden Rudolph (BirelART). Torgerson (Tony Kart) was quickest in qualifying and held off Morgan and Rudolph in the 10-lap Prefinal. The Final was a two-driver battle with Rudolph off on the opening lap with electrical issue. Morgan took the lead briefly at the end of the 14-lap event, but Torgerson retook the position and held on for his third victory. Morgan made one last attempt at turn 11 and spun, but returned to finish second. Brock Boyse (Benik) took third, holding off Tuesday Calderwood (Tony Kart) as Graysen Andrews (CRG) finished fifth.