Taking in the sport I love from where it all began 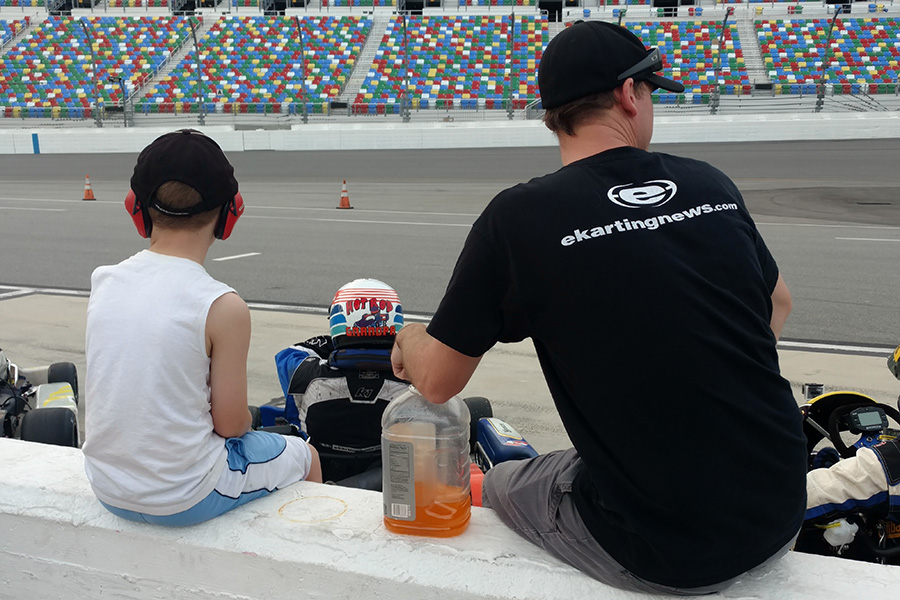 My latest trip to a karting event was not one spent ‘Behind the Laptop’, but instead from where it all began. Born into the sport, I spent many hours along the ‘Pit Wall’ watching kart races at tracks all across the Midwest. From the small little club tracks in Wayland, Michigan and the infamous Rolling Green Raceway in Buchanan, MI, to historic circuits such as the Mid-Ohio Sport Car Course and Michigan International Speedway, I would spend ever moment I could watching from the sidelines as a kid, cheering on my family and friends, dreaming one day of competing and racing for victories. 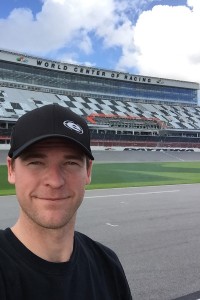 I began racing full-time in 1995 and a year later, made my first WKA Daytona KartWeek start at the ‘World Center of Racing’ – Daytona International Speedway. A return trip in 1998 filled out my Daytona experiences behind the wheel, until I returned in 2004 as a staff member for eKartingNews.com. Three more travel trips made it six total excursions to the historic beach area, with 2009 standing as my last.

At the beginning of the summer, my dad wanted to experience Daytona with the entire family after driving solo for the last few years. The recently retired truck driver went all out, purchasing plane tickets for my entire family, my brother and his wife, along with my mother, so we could all spend the event together with my two uncles, who were also racing. It was a true vacation and the first at the racetrack since I was kid myself.

The weather could not have been more perfect. It was great to catch up with familiar faces around the road racing paddock, some who I have known since I was a child and others that are considerable newer. What made this trip different from the events I have been to the past 11 years was the ability to just enjoy three days at the racetrack. Don’t get me wrong, I love my experiences as a racing journalist each and every time I travel somewhere. This, however, was special. It took me back to my early years of helping my dad and two uncles again, and with their old age, they can use all the help they can get now.

Sometimes, you need to step back and really appreciate the moments at the racetrack. The 2015 Daytona KartWeek will be one for me. My kids got to fly on a plane for the first time, jump into the ocean for the first time, and visit one of the most historic racetracks in the world.  They watched their ‘Hot Rod Grandpa’ drive on the same track that hosts the Daytona 500, which they watch every February with me.

While I was not there on official work duties, as a journalist, you never stop working. I spent most of my time on the road racing side of the venue, and this time, I experienced the event from a ‘competitor’ viewpoint. This was the 39th time that karts took to the famous facility, in a history dating back to 1974. The quest to be the quickest continues, as veteran Johnny West laid down a 1:54.997 during a race, making him one of the quickest of all-time in a 250cc Superkart machine. The best in recent years was a 1:52.634 in a laydown kart powered by twin BRC engines – piloted by Jim Russell Jr. of Russell Karting Specialties – who happened to be racing in the Manufacturers Cup Series event on the sprint track this year. 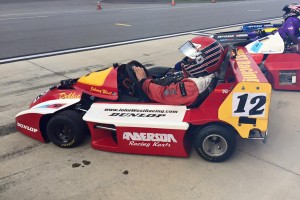 Among the big winners was United States Pro Kart Series event director Rick Fulks. Many among the sprint track community see him running around with the headset on, and not his helmet. The accomplished racer from Illinois competed in the event just days after having screws inserted into the fifth metacarpal of his right hand. Fulks powered through to win all three of his classes, including both 100cc Controlled events and the B-Stock (twin engine) division. EKN will have more on the road racing winners in an article coming soon.

One of the downsides of the event was an incident during the final Yamaha Sportsman race of the weekend, involving Matt Michel. Involved in a four-driver battle for the win after nearly 40 minutes of racing, the group was entering the NASCAR turn-three section when contact was made. Michel was sent up into the wall going well over 100mph. The kart hit the wall with the left side of the kart. Fortunately, Matt’s machine kept him safe enough to survive the wreck, however, suffering six broken ribs and a swollen lung. Looking back through previous events, this was the first incident with a kart hitting the SAFER barrier, which was installed sometime after 2002, and could have helped limit the damage to Michel’s body and the kart. 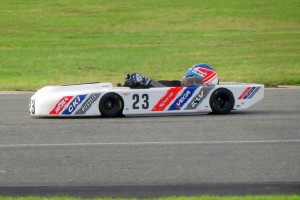 The walls surrounding the Daytona oval appear to be what keeps many of the racers in the Manufacturers Cup Series paddock away from sampling the high banks of Daytona. In karting’s past, many of the top drivers in the sport did it all – sprint, road racing and even dirt track. Adkins, Dismore, Pruett, Lake Speed – they all raced anything, anywhere. Speaking to a number of racers in different divisions, including some of today’s top stars, the appeal to race on the ‘big track’ is not there. They’re either scared of the walls, or not impressed with the ability to hit the 100 mph mark. Whatever it is, it is a challenge that the road racing community faces.

Other than budget, why don’t we see some of the parents of the many young racers competing on the Man Cup side have their own fun on the ‘off weekends’, enjoying racing on their own. If you look at the median age of the road racing side, it’s probably near the half-century mark. That can be an issue down the road as we are not seeing ‘new blood’ into this genre of the sport. Rather than trying to go after the younger market, why not target the karting dads who are not keen on beating themselves up on a sprint track, but who could still enjoy a relaxing weekend at the track with the family without the constant wrenching and swapping back and forth between karts. The other option, that has been brought up by a number of road racing veterans, to help rebuild the laydown categories is having a spec kart package available for new racers. We have seen the Briggs LO206 category begin to help rejuvenate the local clubs with former and new racers. If chassis manufacturers were able to develop a spec kart, with spec bodywork and the nearly unbreakable Yamaha engine with the ‘Sportsman’ pipe, it could help bring new people into the sport.

Numbers-wise, the race was consistent with past events. Entry numbers for the Road Race event were near 450, with an approximate 35-kart count average for the 13 race groups over the two days of competition. That’s a solid number, and one that WKA needs to see continue throughout their 2016 program. The national events have become more akin to glorified regional or club events. The prestige is nearly gone for winning at a National, aside from Daytona, because let’s face it, any time you win at Daytona, it is an accomplishment. As of right now, four events are on the National Road Race calendar for 2016. Roebling Road is the next stop, scheduled for March 11-13. While it’s great to support road racing in the south, the facility is not a draw for people outside the area and as a result, numbers could be light when compared to Daytona. Virginia International Raceway always draws a crowd each year, despite the high temperatures in July. Summit Point is another facility that draws mostly regional racers, and it is set to run it’s National in August. Looking forward, I think road racing needs to take in some thinking from the sprint side of the sport, and offer less events for the series at facilities that draw in racers. More focus needs to be on building the regional programs and less on providing a series that only a handful of people actually follow. 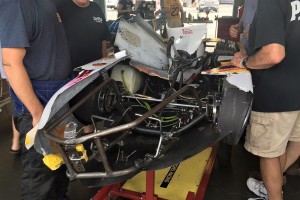 Matt Michel walked away from a scary incident with the Turn 3 wall on the NASCAR oval section (Photo: M. Michel)

Making a return to the road racing side, I was confused, as were a number of others, by the kart numbering system. For years, kart numbers were assigned by registration based on the class you raced, and when you entered. If you’ve road raced, you know you love those paper numbers (laughing). It helped for logistics in lining up the karts for the start, and helped those watching understand who is in what class. WKA is introducing a reserved number system in 2016, similar to that of the Manufacturers Cup Series. Racers were not aware of this, however, as were those at the registration desk. A number of duplicate digits were assigned on the weekend, which is confusing for the Race-Monitor system. Thankfully with the phone app, those along the pit wall can follow along with who is in what class, as long as each driver on track has their own ‘assigned’ number. I’m sure WKA will have this figured out for the next event in March with each driver carrying their own number.

Overall, the event went smoothly with just two red flags, one for a light sprinkle at the end of a 45-minute laydown race, and the second for the Michel incident that was also on the last lap. Buddy Long, Brandon Taylor and rest of the WKA staff kept things in order and the event was finished before the Man Cup and Dirt events were completed, allowing the competitors to enjoy the Daytona Beach amenities. There is no doubt that if you haven’t experienced the feeling of jumping up on the high-banks of Daytona, it is a bucket list event for sure.

5 thoughts on “Behind the ‘Pit Wall’: WKA Daytona KartWeek”