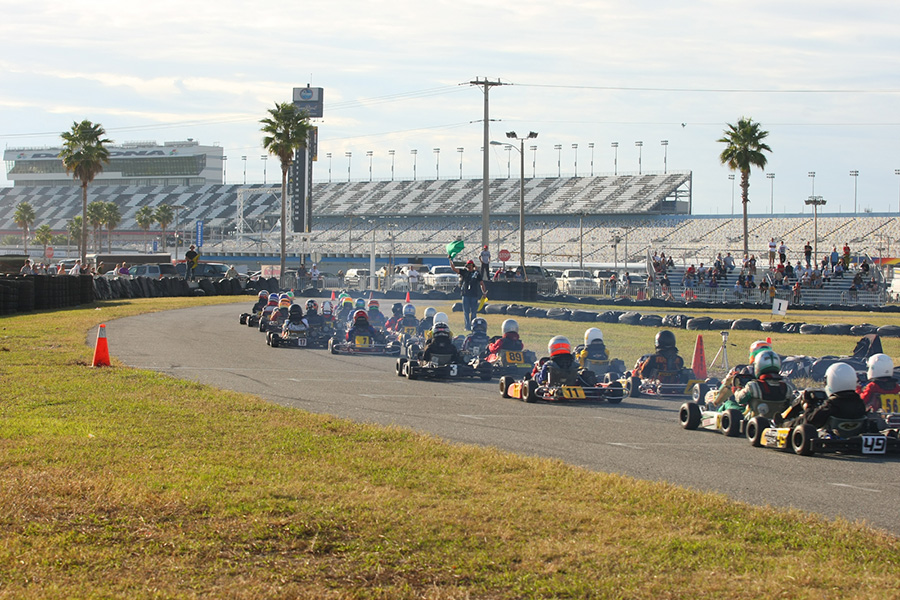 There is no other event like it in the world. Karters from different genres come together to one location every year for the annual World Karting Association Daytona KartWeek to celebrate the prestigious event between the Christmas and New Year’s celebrations. Daytona KartWeek combines the Manufacturers Cup Series, Road Racing, and Dirt World Championships into one ‘triple-crown’ event at the Daytona International Speedway. The ‘World Center of Racing’ provides a 3/4-mile sprint track inside turn 3-4 of the NASCAR oval. Much of the oval is part of the 3.46 miles of the road racing circuit, the same used for the famous Daytona 24 Hours. Just outside the 1-2 NASCAR turns is the 1/4-mile dirt flat track for the Dirt World Championships.

The 2016 Manufacturers Cup Series has undergone changes for the new season, reverting back to a two-final schedule for the five events on the calendar, including Daytona. The race day now includes warm-up, qualifying, two heat races and a main event. Class structure has been condensed down to eight for 2016, with Daytona welcoming 10-total with the inclusion of the popular Briggs & Stratton LO206 Senior and Junior divisions. Their addition is due to the new Winter Cup program WKA is introducing in 2016, beginning with Daytona KartWeek and followed by an event at the historic 103rd Street Sports Complex in Jacksonville this February and completed at the GoPro Motorplex in Mooresville, North Carolina at the beginning of March. Eight classes, including six from the Manufacturers Cup Series and two from the Gold Cup program.

Alexander Kardashian (Top Kart) was the double champion in the two TaG divisions in 2015, and is among the 37 entered in Pro IAME Senior. He will have to contest against some of the top names in the sport, including Florida driver AJ Myers (iKart) who won the Stock Moto category a year ago. Austin McCusker (Deadly Kart), Andrew Bujdoso (PCR), Austin Garrison (Tony Kart), Billy Lewis (Parolin), Jacob Donald (Praga) and Jonathan Kotyk (Top Kart) are among the big names competing. NASCAR’s AJ Allmendinger (Praga) is making his annual return to his roots with another trip to Daytona KartWeek.

A new name in the Senior ranks is former WKA Triple Crown champion Brandon Lemke (Merlin), moving up for the 2016 season. Lemke is set to contend both the Pro IAME Senior and Yamaha Senior division, which has 13 drivers set to compete. The category has reverted back to the RLV Can muffler, replacing the exhaust system mandated a few years ago. Dakota Pesek (Top Kart) is the defending winner in the Yamaha Senior ranks.

With Lemke out of the Junior level, that has opened up the doors for some new blood at the top. The Merlin brand continues to be strong at the younger categories, with Alex Bertagnoli coming off a strong podium performance at his first SuperNationals event in Las Vegas. He is competing in the both IAME and Yamaha, as is Lance Fenderson (Tony Kart). Pauly Massimino (Top Kart), Jack Miller (Tony Kart) and David Kalb Jr. (FA Kart) are others to watch in the Junior ranks.

The Briggs LO206 categories is brining over 50 drivers to the Daytona KartWeek on 4-cycle powerplants. The Senior division is over 30 with some of the big names from the Gold Cup series – Sean Meier (Coyote), Corey Towles, Brad Farmer (Coyote), Michael Greiner (Margay). Former Gold Cup and SKUSA Pro Tour competitor Chuck Gafrarar (Parolin) is getting back behind the wheel after a year of focusing on his son’s Kid Kart schedule. Margay Racing’s Arrive-n-Drive program is bringing in Daytona KartWeek rookies, with drivers coming as far as California to be part of the event.

The largest combined categories are in the Sportsman division with nearly 30 in Pro Swift and Yamaha. Jason Welage (Top Kart), Luca Mars (CompKart), Robert Noaker III (Merlin), Connor Ferris (Top Kart), Madison Campeau (Praga) are among the front runners in both fields. The Mini Swift (18 entries) and Kid Kart (14 entries) categories are also going to be fun to watch, as they represent the future of the sport. Click HERE to get a full run-down of the event schedule and class order.

The longest running event during the Daytona KartWeek is the Road Race program. In 1974, the World Karting Association held the first ever Road Race Championships at the Daytona International Speedway. Each year, drivers from across the continent, and event the world have traveled to sunny Florida for the chance to take on the high banks at DIS, aside from two years when the event was not held (2006 was not held for organizational reasons and 2010 due to the repaving of the 2.5-mile tri-oval). A full day of practice is scheduled for December 28 from 9am to 5pm as racers prepare for two days of competition. Seven race groups are set for Monday, December 29 with many of the same categories running for a second time in one of the six race groups for Tuesday, December 30. Ranging from the very popular 4-Cycle sprint categories, 2-Cycle sprint, 2-Cycle laydown, TaG, shifter karts, and the Unlimited groups. The quickest categories are the laydown 125cc shifterkarts and 250 Superkarts – which reach lap times in the 2:00-range. Click HERE for the complete schedule for the Road Racing event.

Rounding out the Daytona KartWeek experience is the WKA/Unilli Tires Dirt World Championships. Nearly $50,000 in payouts to the 39 winners on the two-day event. Day one (Monday, December 28) will offer 18 categories, focused primarily on the Animal engine, with day two (Tuesday, December 29) around the Clone powerplant with 21 classes. Wednesday, December 30 will be saved for a rain date. The headline event will run Tuesday with $10,000 up for grabs to the winner of the Pro Clone Heavy race. Click HERE for a complete schedule for the Dirt World Championships.

eKartingNews.com is set to bring you updates as it happens throughout the WKA Daytona KartWeek event. The Manufacturers Cup Series will be the focus of the updates, along with daily reports and live coverage at eKartingNews.com/live during the two-days of racing. Information/results from the Road Race and Dirt events to also come through the Official Discussion Thread, Facebook, Twitter and Instagram.