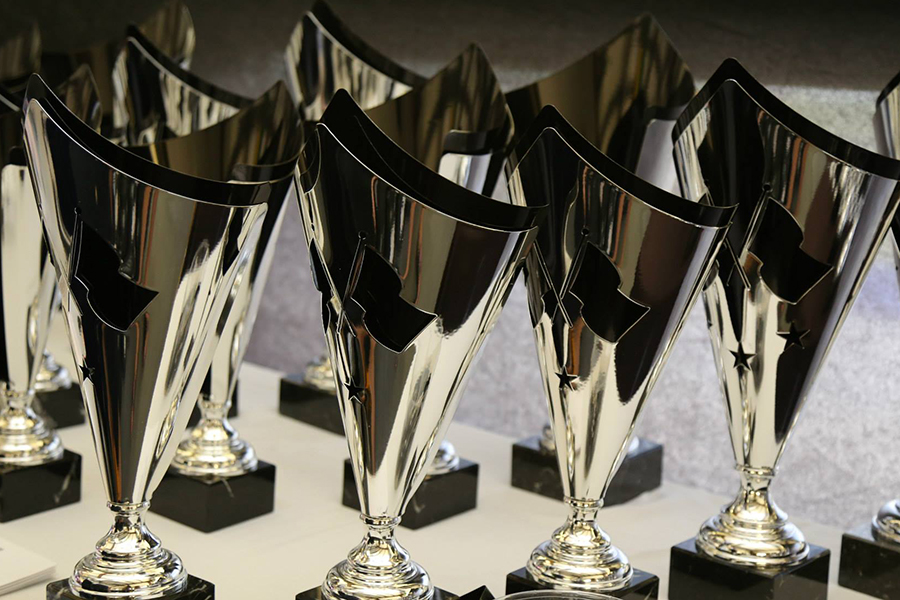 The United States Pro Kart Series closed out its third season back in August at the New Castle Motorsports Park facility in central Indiana. The final two rounds of the eight-race championship were contested on the 1-mile circuit, with the championship chase coming to a close in the eight categories. That Sunday evening, the series recognized the top-five finishers in the point standings during the year-end awards ceremony. Another large prize package – thanks to supporters MG Tires, Vortex Engines Mazda, Comet Racing Engines, Franklin Motorsports, and Look Trailers – were handed out, including a number of special awards and trips, capping off a successful season for the USPKS. 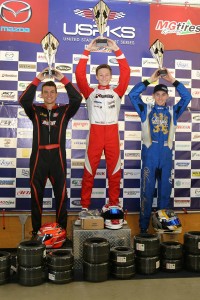 Each of the eight class champions was awarded the championship trophy, in addition to a USPKS Champion’s suit and ring along with a $500 USPKS gift certificate. All the top-five finishers received a set of MG Tires and a gift bag from TS Racing. Vice-champion earned a MG Tire personalized jacket and $750 USPKS gift certificate. Third and fourth place in the standings each received a free 2016 entry and pit spot for the series, along with a $50 PKT certificate, with fifth place also earning a free 2016 entry and pit spot. IAME awarded the Leopard Pro and Leopard Junior with prizes, including a piston kit for first thru third, with fourth and fifth receiving a clutch kit. A $1,000 certificate toward the purchase of a Pit Box from KartLift was raffled off for drivers that registered for all of the USPKS events in 2015, with Aidan Harrington having his name selected. Family prizes by Marx Fireplaces and Lighting were awarded to competitors as well. Mark Erpelding won the Praga chassis raffle, with the kart donated by Praga North America.

Every single position mattered for every lap of the season finale in the Franklin Motorsports Leopard Pro title chase. Elliot Finlayson came into the weekend leading the championship chase, knowing he would have to keep himself at or near the front to have any chance of leaving Sunday as the champion. The Illinois driver did so, placing top three in all seven on-track sessions in New Castle to become the third different class champion in three years. Finlayson is also the first series champion ever to claim the title without a single main event victory, showing the consistency throughout the year for the newly crowned driver. Last year’s Yamaha Pro champion Brandon Jarsocrak opened up the year as the point leader, only to see it slip away following the South Bend weekend. The Pennsylvania driver gave it all he had, but came 44 points short of bettering Finlayson’s final score. California pilot Andrick Zeen used his two victories at the finale weekend to advance up to third in the final standings. Florida’s Ryan Norberg ended the year as the top rookie driver, finishing the series in fourth while Dustin Stross ended up fifth. 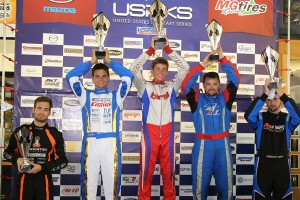 Defending champion Brandon Jarsocrak removed himself from the Comet Kart Sales Yamaha Pro title chase after the halfway point to focus on his Leopard program. That opened the door for another driver to become the third different champion. In the end, it came down to Dakota Pesek and Senior rookie Mike McAndrews. The two drivers went into the finale weekend in New Castle tied for the top position in the standings. It provided an exciting two days on-track, with all eyes on both with every position between them changing the difference in points. On Saturday, McAndrews was able to gain 80 points over Pesek en route to a runner-up finish after Pesek had to claw his way up the order to finish third. Pesek recovered 10 of those points by qualifying first Sunday morning and another 15 in the Prefinal while McAndrews was penalized to start deep in the field for the main event. McAndrews put in a championship-winning performance, coming from 17th to 1st in the Final to claim the title. Pesek settled for second, one position better from the previous year. 2014 vice-champion Tony Jump ended up third in his final full season behind the wheel, with veterans TJ Koyen and Steven Arens rounding out the top-five. 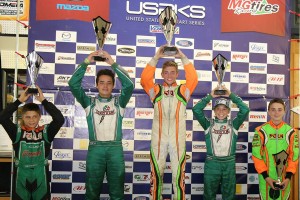 The Junior ranks belonged to Brandon Lemke all through 2015. Lemke nearly swept all eight main events on the year in the GT7 Motorsports Leopard Junior category and won six of the Finals toward his championship performance in Woltjer Racing Engines Yamaha Junior. Of the 31 on-track sessions in Leopard, Lemke was P1 in 25. The eighth round was the only blemish on the record, not recording a single P1 result on the day, however, the title was already wrapped up and Brandon had the provisional victory taken away due to a penalty for contact early in the race. Zach Holden was the top challenger all season, earning the Round Eight victory to clinch the vice-champion position. Junior rookies Lance Fenderson, Alex Bertagnoli, and Austin Schaff rounded out the top-five in points. Lemke was able to end Holden’s championship streak, as the two-time defending champion could went winless on the season. Lemke’s six victories put him well out ahead in the standings to become the second driver to win two championship in a single season. Holden beat out Fenderson for second with Stephen Dial placing fourth ahead of Gio Bromante. 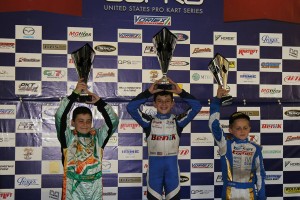 The Orlando Kart Center Mini Rok Cadet championship went down to the final few feet in the Round Eight main event. Lachlan DeFrancesco and Sam Mayer entered the race separated by just 14 points. Outside of winning, every position mattered for the two drivers. Late in the race, Mayer held the lead with DeFrancesco losing the draft, and what he thought was the championship. On the final lap, heading to the checkered flag, three drivers drafted past Mayer to push him from first to fourth in the matter of a few hundred feet. That flipped the point standings in the favor of DeFrancesco, giving him four more points than Mayer to earn his first series championship. The heartbreak for Mayer turned into a learning experience and the vice-championship. Jason Welage ended the year in third with Round Eight winner Robert Noaker III moving up to fourth over Nicholas d’Orlando.

DeFrancesco was awarded a trip to the Rok Cup International Final for his class championship. Lachlan receives a complete kart package and entry into the event along with a four-night hotel stay and airfare for the driver provided by the USPKS. Joining him on the trip will be Derek Dignan. The Rok GP Senior category was added to the USPKS roster at the Shawano event, in a unique championship format. Dignan won the opening round, and the final round to claim the inaugural class championship. 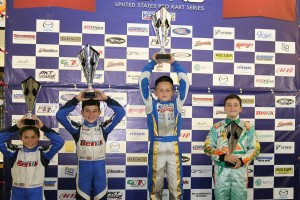 Jason Welage has become the latest star in the Cadet ranks, performing at his best in the Switch Racing Engines Yamaha Cadet to earn his first major championship. Welage collected three wins on the year, along with four runner-up results in the eight main events to dominate the championship chase. Lachlan DeFrancesco finished the year strong, moving up to second and eclipsing Sam Mayer once again. Tyler Maxson scored his first major victory of his Cadet career, finishing fourth in the standings ahead of Robert Noaker III.

It was Donald Whorton II leading the QPS Employment Group Yamaha Rookie championship chase from start to finish. After opening up the year with two wins in Mooresville, Whorton added two more in the final six races to earn the most points for the championship. Aidan Hinds was one of four other winners on the year, placing second in the standings. Round Seven winner Owen Mahle ended the year third, with Round Eight winner Lucas Smalec in fourth. Capping off the top-five in the championship chase is Round Six victor Conner Churchill. All the competitors in the category put on amazing shows throughout the year, and certainly are going to be among the top drivers in the future. 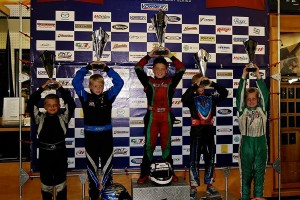 Plans for the 2016 season are continuing to develop, with the four-race championship season set to begin in February. For more information on the United States Pro Kart Series, please visit them online at www.USPKS.com or contact Mark Coats via e-mail mcoats.uspks@gmail.com.