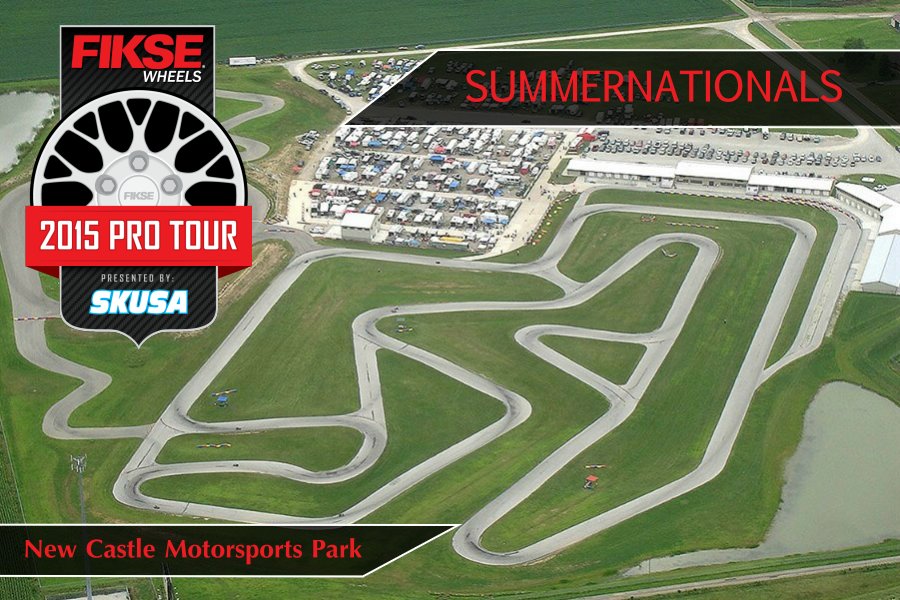 The popular 2015 Superkarts! USA Fikse Wheels Pro Tour resumes this weekend, as the program heads to the New Castle Motorsports Park in New Castle, Indiana for the first time. A successful SpringNationals in Arizona back in May launched the sixth season of the organization’s championship series, which is helping to take the sport to the next level here in the United States. Adding a new mainstream title sponsor Fikse Wheels, television coverage thanks to the partnership with CBS Sports Network and Torque.TV, and another stellar prize package for the year that reaches over $150,000, the Fikse Wheels Pro Tour is unmatched. The SummerNationals moves east of the Mississippi for the first time since the inaugural SummerNationals in Shawano, Wisconsin, and has racers in the four Stock Moto and four TaG divisions on the docket, with roughly 230 pre-entries signed up for the weekend.

New Castle Motorsports Park will host the SKUSA Fikse Wheels Pro Tour for the first time. Indiana was the organization’s home for many years, before it moved out to California under the direction of the Kutscher family. Regional SKUSA racing took part at the New Castle, Indiana facility in previous years after the track’s construction in 2004. The 1-mile course was designed and built by IndyCar driver Mark Dismore, a legendary name in the sport of karting. The Dismore family continues to improve the amenities surrounding the course, making it one of the popular destinations for the sport of karting here in North America. 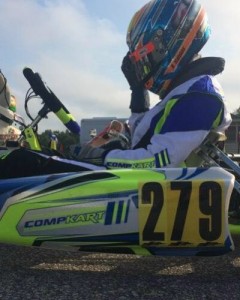 The intensity and pressure will be amped up this weekend in New Castle in the TaG Junior division, with the championship hopes on the line and the field increasing to almost 30 drivers. Defending champion David Malukas has the target on his back still, coming out of Phoenix in the top spot of the standings to begin the 2015 title defence. Malukas won the opening round feature and finished third on Sunday to give himself a solid start to the year. His Phoenix weekend was aboard the familiar Top Kart, but the driver is now making the switch over to the growing CompKart brand with J3 Competition.

The leading challengers are familiar names, and long-time competitors to Malukas…Anthony Gangi Jr. and Brandon Lemke. Gangi (Tony Kart) has had success at New Castle, earning his first national championship victory at the facility back in 2010. Lemke has multiple wins at the circuit, and the Franklin Motorsports / Merlin driver is coming off a near sweep of Round Two back in Phoenix. Contact between Gangi and Lemke during the second heat race on Saturday has put them further back of Malukas in the standings then what they could be. Gangi is only 105 points out of first thanks to a rebounding fourth place effort on Sunday, while Lemke suffered a DNF which will likely become his drop round heading into the SuperNationals in November.

The two podium finishers alongside Malukas on Saturday included Nicky Hays and Zoey Edenholm. Both Hays (Ricciardo Kart) and Edenholm (Kosmic) are traveling to New Castle for the first time, and they’ll need to bounce back from their tough finishes in Round Two in Phoenix to remain in the championship chase. The race is home track for a number of drivers with plenty of experience at the New Castle circuit. Zach Holden (Top Kart) drove his first ever laps in a kart at New Castle, and needs a solid weekend to put himself in the title chase. His teammate John Paul Southern Jr. (Top Kart) is another with success and plenty of laps logged at the facility, and he currently sits seventh in the point standings. 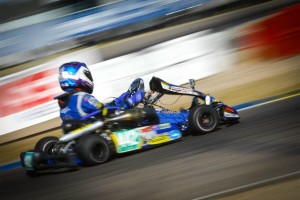 Callum Smith was a blur to the rest of the S5 field at the SpringNationals (Photo: On Track Promotions – otp.ca)

Callum Smith hopes to keep his streak intact heading to New Castle. Smith (Praga) drove to a sweep during both days of the SpringNationals, earning a perfect score on the weekend to solidify himself as the championship contender. On the season, including the California ProKart Challenge schedule, Smith has gone six-for-six in main event finishes. Leading the challenge is Evan White (Kosmic). The Canadian from Alberta made his class debut at the SuperNationals in 2014, and finished his first-ever SpringNationals with a fourth and runner-up to end up second overall in the standings. Hunter Kelly (Praga) was the fifth different driver to land on the podium at the SpringNationals, placing third during the Sunday main event to put himself in the championship chase.

Two drivers needing to have solid weekends in New Castle to get into the championship fight include Anthony Freese and David Malukas. Freese (Praga) had the pace to battle for the podium but came up short in both main events. Malukas, the 2014 SKUSA Pro Tour TaG Junior champion, made his first-ever laps and start aboard a Stock Moto machine in Phoenix. Start line launch issues plagued his weekend, despite the fact that he had the pace to contend for the win. The Illinois driver will make his SKUSA debut aboard the CompKart, switching over from Top Kart just this month. 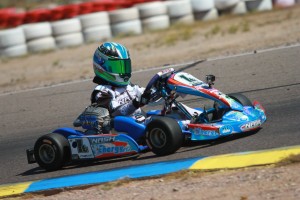 At the SpringNationals, the TaG Cadet division reached the cap of 44 drivers to compete in Phoenix. For the SummerNationals, SKUSA opened up the entry to welcome more than 44 competitors, and is introducing a three-group flight system for the heat races, along with an LCQ to decide the final 44 drivers that will compete in the main event each day. Leaving Phoenix, Jak Crawford earned the top spot in the championship standings. Crawford (Energy) nearly earned a perfect score for Round One, missing out on the fast lap honors after sweeping the on-track sessions. An issue in the opening heat race on Sunday sent him to the tail of the field, as he drove his way back up to sixth, missing out on a top-five finish. The consolation prize for Crawford is leading the championship going into New Castle.

The other driver to score a victory at the SpringNationals was Jason Welage (Top Kart), who finds himself seventh in the standings after a disappointing 15th result in the Round One feature. In total, nine different drivers finished inside the top-five in the two main events at Phoenix. Just eight points out of first is Ryan Schartau. The Ryan Perry Motorsport / Tony Kart driver finished seventh on Saturday after running outside the top-10, but bounced back to contend throughout Sunday, eventually finishing as the runner-up in the Final. Florida driver Lachlan DeFrancesco nearly matched those results, placing sixth on Saturday with fast lap honors. The Benik driver came back to qualify first on Sunday, ending the day third on the podium. Anthony Willis (Benik) was the more consistent driver on the weekend, competing at this home circuit. Willis finished fourth in both main events, putting himself just 42 points out of the championship lead.

Oliver Calvo (Tony Kart) finished fifth on Saturday and remained in the top-10 on Sunday, putting himself fifth in the championship standings. Diego LaRoque (Benik) landed on the podium for Round One, but slipped to 15th on Sunday to put him sixth in the title hunt thus far. Wesley Mason (Benik) was the other podium finisher at the SpringNationals, earning the runner-up spot on Saturday, and he is coming to New Castle sitting eighth in points, with Sam Mayer (Merlin) as the ninth different driver finishing in the top-five in the two main events at Phoenix.

Of the top-nine in the standings, Welage and Mayer have the most experience at the New Castle facility and they will hope that the home track advantage can move them up further in the championship standings. With the long straights at New Castle, the familiar draft-pack style of racing will be seen throughout the weekend, with a forecast of the victory to be decided in the final corner, heading to the checkered flag.