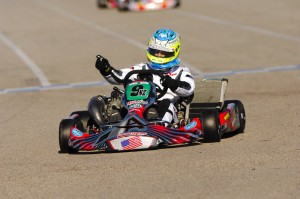 Kiwi driver Matt Hamilton is back to defend the S4 victory (Photo: On Track Promotions – otp.ca)

In a sport that sees many of its younger participants leave in search of professional careers in car racing, having a flow of talented drivers within the class structure provides much-needed stability.  The Masters categories offer this consistency and excitement in karting, and most certainly within the Superkarts! USA community. Each year, the S4 Master Stock Moto division gets deeper and deeper with talent, thanks to the younger drivers moving in from S1 and S2 into the category, which is reserved for drivers 30 years of age and older.  In addition to the arrival of new drivers each year, it is the dedication, passion and commitment of the elder statesmen that raises the competition exponentially, as they train month after month, pounding out laps, to compete at the top level. The average age of this year’s roster is 42, which speaks volumes for the diversity in the 75+-driver entry list. All but four of the top-20 finishers from a year ago are returning, including eight of the top-10.

Defending SuperNationals winner Matt Hamilton capped off a stellar Superkarts! USA debut when he piloted his Aluminos chassis to its very first victory in Las Vegas. His win last year helped push him to contend the entire Pro Tour schedule in 2014, as the Kiwi has traveled to both the SpringNationals and SummerNationals. After winning the opening round of the Pro Tour, he finds himself sitting third in the championship chase, still in position for a run at the title with another winning performance during the SuperNats. 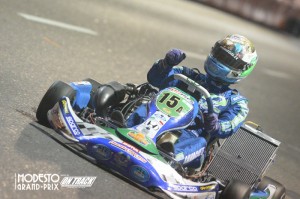 The driver at the top of the standings heading into the Rio event is Italian Gian Cavaciuti. The GP Kart factory driver won both features of the SummerNationals in Modesto, and adding in his fourth from the second feature of the SpringNationals, he holds a 35-point advantage going into Las Vegas. Last year, Cavaciuti bounced back from a poor qualifying result to contend on SuperSunday, only to suffer a spin and retire early.

Cavaciuti’s primary challenger in the title chase is last year’s champion Jordon Musser. It was a solid season in 2013 for the 3G Kart Racing / Birel driver, earning two wins at the SpringNationals and placing runner-up at the SuperNats to secure the Pro Tour championship. This year, he was second in both main events in Dallas, and despite suffering some ups and downs in Modesto, the #1 plateholder still managed a third place finish on Saturday. With numerous titles and victories already on his CV, a SuperNationals win is the one sought-after trophy that Musser is still gunning to add to his mantle in Texas.

Including Hamilton, there are seven former SuperNationals winners in the S4 Master Stock Moto field. One of the most successful in the S4 division has been Bonnier Moulton. Beginning with his G1 victory in 2004 G1 and then his back-to-back performance in 2011 and 2012, the MSquared Karting / Tony Kart pilot has been the benchmark of the Master shifterkart categories for the past decade and is one of two drivers to compete at every SuperNationals events. Bouncing between S1 and S4, the Utah driver has shown speed no matter the competition. Equaling Moulton’s win total at the SuperNationals is returning driver Darren Elliott. The Californian was the S1 victor back in 1998 at the Las Vegas Karting Center (XPlex) when the modified moto package was the engine of choice. Elliott returned in 2006 and 2007 to take the victory in the G1 (ICC-powered Master class) category after taking some time away from the sport.  Darren is making his second karting ‘comeback’, and the MRC / CRG driver is looking better than ever. Elliott won at his SKUSA Pro Tour debut in Dallas, and secured the California ProKart Challenge S4 title with four wins on the year. 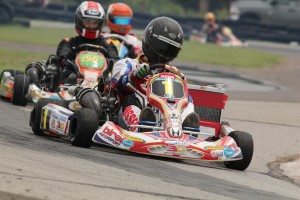 Also moving back to the S4 division after some time in S1 will be 2011 S4 Pro Tour champion Jimmy McNeil. The CRG-USA driver’s first SuperNats win in S4 came back in 2010, and he followed it by winning the last G1 main event. The last two years have been S1 campaigns for McNeil, and a limited schedule in 2014 has convinced him to make a return to S4. Texan Chris Jennings is the only other returning S4 SuperNationals winner next to Hamilton and Moulton. A now three-time Texas ProKart Challenge champion, the 2008 S4 SuperNationals winner has slimmed himself down to 185 lbs in an effort to be more competitive in both the S4 and S2 Semi-Pro categories, aboard his DRT Racing / DR Racing Kart. The remaining SuperNationals winners include John Crow (TaG Master – 2005) and Eduardo Martins (G1 – 2001).

With four drivers from last year’s top-10 having been already mentioned, four others are looking to improve their 2013 finishing positions. Trevor McAlister has been a threat at the SuperNationals during the early era of the event, and returned a few years ago to continue his position at the head of the class. Fourth last year, ‘T-Mac’ is ready to improve on the result aboard his Leading Edge Motorsports Praga. Also on the podium in 2013 was Italian Mirko Mizzoni. A solid fifth place, the Italcorse America driver returned to the Pro Tour podium steps when he was third on Sunday at the SummerNationals.

2012 SKUSA Pro Tour champion Eddie Olpin did not enjoy the title defense he was looking for last year. A ninth place result at the SuperNationals put him sixth in the final point standings. Absent from the Pro Tour this year, Olpin (Kosmic) is making his 2014 debut in Vegas. Washington driver Derek Wang was one spot away from the podium a year ago in his S4 debut. This year, Wang (Ryan Perry Motorsports / FA Kart) is looking for the same in his only S4 Pro Tour start before jumping on a plane on Sunday to travel to Spain for the Rotax Grand Finals as part of Team USA. 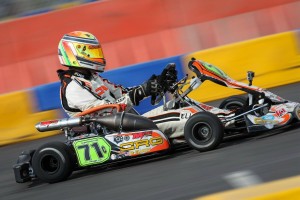 A number of drivers will be making their first career S4 starts. One such pilot is longtime SKUSA racer Scott Barnes. The Bermuda driver travels to the United States year after year, taking part in certain events and series, including the SuperNats. The young Intrepid driver turns 30 on Sunday, November 16 to qualify him for the S4 division by just a few days. More international drivers are joining the craze that is S4, along with the female drivers. Two will line up on Wednesday when the event begins, including British driver Tiffany Chittenden. The former British DD2 champion has a solid resume behind the wheel, ready to make her S4 debut with Aluminos before she heads off to Spain to compete at the Rotax Grand Finals racing for team New Zealand after recently moving there. Aussie driver Jason Faint is another international pilot adding S4 to his CV. Faint (Energy) was a top contender in S2 last year, and will pull off the double duty role.

As far as star power for the S4 class is concerned, we’ve got that too.  Last year was the debut at the SuperNationals by three-time World Champion, three-time Olympic Silver Medalist, and nine-time Canadian figure skating champion Elvis Stojko. The karting enthusiast qualified for the main event last year, but is gunning to be more competitive after working hard all season with Trevor Wickens’ Maranello North America operation. 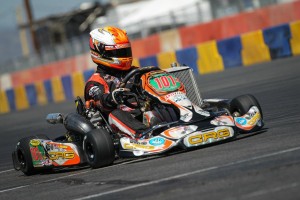 To be honest, I broke out into a crazed laughter when I started contemplating my top-five selections for S4.  I’m mean, really. Really? The class is now ripe with former national champions and SuperNationals winners, and in many cases, these drivers are more focused and dedicated to the craft than their younger S1 and S2 counterparts. I have a genuine and workable list of 10 potential race winners that I need to jam into five selections.  It’s impossible.  And…that’s ridiculously cool.  This class has become was I always hoped it would and it will very likely be the most enjoyable class to watch this weekend.  And when it’s all said and done, the winner of S4 and TaG Master will likely be the most emotional and most reflective over the importance of the victory.

But, Cole tells me that I can’t pick 10 guys, so here’s my five. Darren Elliott has a fire inside him now like I have not seen in 17+ years that I’ve watched him race, and winning this year’s SuperNationals is his goal.  I believe that he will achieve this on SuperSunday to put another victory in the win column.  With the track layout have remained fairly static over the past couple years, it’s hard to argue with success, which puts Bonnier Moulton and Matt Hamilton in the middle of the fight, while Rob Logan has impressed me this year, immensely, and coming off his win in Lancaster, I think he has great momentum and confidence.  Lastly, if he and Greg Bell are on their game, come out of the box strong and can avoid issues, Trevor McAlister can never be counted out. 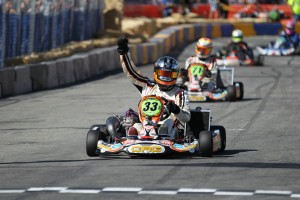 The record for most victories at the SuperNationals is four wins, held by current Porsche driver Connor De Phillippi. Elliott has been fast all season, and loves the SuperNationals element with a solid winning percentage in Las Vegas. History is made when Elliott secures his fourth event victory, his first in the S4 division. The championship fight remains close the entire week, with Musser edging out Hamilton for the runner-up spot, and the title decided by just a few points. Two drivers who showed speed at the end of the year are Mike Mantel and Rob Logan. Mantel (Pure Karting / Tony Kart), if everything stays together, will be among the quick drivers all week and should be there SuperSunday. Logan (MRC / CRG) is riding off the momentum of the big win at the Streets of Lancaster Grand Prix. Having the confidence will carry over as Logan will return as a contender once again at the SuperNationals.