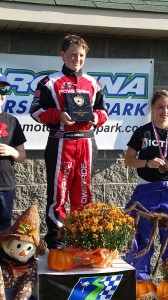 Joseph Lamberth is all smiles on the top step of the podium at Carolina Motorsports Park
(Photo: Brandy Lamberth)

Joseph Lamberth, Mini Max driver from Statesville, North Carolina out of CarolinaMotorsports Park (CMP) in Kershaw, South Carolina recently finished his Mini Max career on a high note on his Haase Bomber chassis. After three short years in karting, Lamberth has taken his serious attitude and determination, and made great strides with his driving. It didn’t take long for this young driver to find his rhythm as he began finishing with podiums mid-season during his rookie year. After tasting that success, he never looked back.

During his second year, Lamberth travelled between Florida and South Carolina constantly, racing every chance he had. He went to Nationals at the GoPro Motorplex in Mooresville, finished 15th, and won a ticket to the Grand Finals in New Orleans, Louisiana. There he placed 18th, clinched his first championship at CMP, as well as second place in the GoPro Motorplex Championship. Remembering this was only his second year in a kart made Lamberth’s short career sheet all the more impressive.

In his third year, due to some personal scheduling setbacks, Lamberth was not able to take to the track as much as he had the previous year; however, with his passion for the sport he was sure to make it on track whenever possible. Through this season, Lamberth was able to make it to Ocala, Florida on several occasions. Not only did he make it there, but he usually found himself on the podium as well. Finding an added passion for the ROK series, he found time to make a few appearances there but did not have the finishes he desired. As he headed for Nationals in Utah, Lamberth was ready to come back and landed a top-ten finish. Throughout the weekend it seemed he was more than able to pull it off; however the young driver ended up finishing 11th. October 11 marked the last race of his 2014 season. Lamberth wasn’t going to settle for anything other than an amazing end to his season, and succeeded in his second Championship at CMP. With this, Lamberth decided to also make this his last race in the Mini Max division. With seven wins (six being consecutive) and one second place finish under his belt for the season, he can only look forward to what is ahead in his karting career.

Lamberth will take to the track in November 2014 at CMP in his brand new Haase Spirit junior kart. He plans to run in the junior division throughout the duration of the year, and plans to develop and work extensively, growing to be even more prepared for a competitive season next year. He has a great group of juniors at Carolina Motorsports Park that will are always willing and ready to coach him whenever needed. Lamberth is excited to see what the next month will bring, asking himself if he can place on the podium his first junior race. All of those backing this talented junior driver surely hope so.

As always, Lamberth wishes to thank Haase Kart for making an “awesome kart” as well as for their support every month, TK Wrap Designs, K1, and Powerade for their continued support as well as sponsorships. He would also like to thank Paul and Debbi Appleton for their continued support and sponsorship, as well as his parents and sister for always being there for him. He has continued thanks and gratitude for his family, friends, school, and church family for all of their support for the past three years.