Four tickets to Rotax Grand Finals on the line

EKN’s Paddock Insider is a new Trackside coverage addition, bringing you notes, updates and breaking news as it happens. The article will be a timeline of events as they happen during the Cold Stone Rotax Pan American Challenge. The information will not be seen anywhere else, including interviews and photos. Please feel free to comment and discuss our coverage and today’s action in the EKN Global Members Discussion area below:

Penalty Box Changes
The Rotax Max Challenge has added new penalties to their raceday format. One of the more shocking new rules was the penalty handed down for coming in underweight. During Friday’s qualifying session, provisional polesitter Ben Cooper came across the scales underweight by one pound. Rather than a disqualification, Cooper was handed a three position penalty, which kept him in the Super Pole session and allowed him to reclaim the pole position for the heat races. Rotax Max Challenge has instituted an adjusted penalty structure for those penalties that are not deemed an advantage. In this case, underweight by up to one pound is up to a three position penalty, five for two pounds and to the back of the field for up to five pounds under. A similar structure is in place for technical penalties during inspection where ‘non-compliant’ infractions that are deemed to be a non-advantage are subject to just position penalties rather than a full disqualification. It is something different from what many in the karting community are accustom to, but the RMC in Canada has been following this and a similar structure was used at the US Grand Nationals this July. 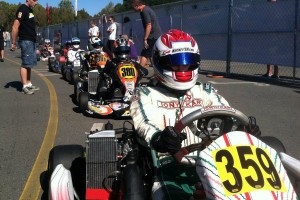 Diversity
The top four categories here at the Pan American Challenge are seeing some diversity in the chassis brand at the front. In two of the four classes, Birel secured the top position with Dan Roeper and Ben Cooper on top in Senior Max and DD2. OTK brands continue to make up the majority of the paddock, however, the number of brands in contention seem to be increasing. The Senior field had five different brands in the top six with Birel, Tony Kart, FA Kart, Intrepid and CRG. As it has been told for a number of years, and shown with the success of the top drivers, any chassis can be adjusted to make it work at any level in the sport. 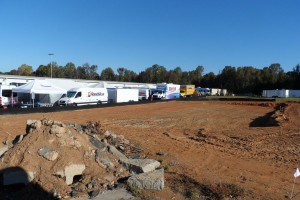 Construction underway for the new shop at GoProMotorplex

GoPro Expansion
On the day celebrating the two-year anniversary of the GoPro Motorplex, the Mooresville facility announced a new project, building a purpose built shop for the KartSport North America and IAME East facility. At 6,000 square feet, the entire shop will move from the main facility building to the new location, currently under construction at the northeast portion of the paddock. KSNA’s Eric Jones is excited about the move, which was planned since the beginning of the facility. The current area of the shop will become a corporate area for the many events the GoPro Motorplex hosts throughout the year.

Early Grand Finals Testing
This past weekend, Team USA driver Sting Ray Robb traveled to Valencia, Spain to sample the Kartodromo Internactional Lucas Guerrero Chiva – site of the 2014 Rotax Max Challenge Grand Finals. Robb earned his ticket at through the Rotax Can-Am ProKart Challenge program, finishing second in the standings behind Rotax Challenge of the Americas champion Austin Versteeg. Since Versteeg had a ticket already, Robb was awarded the ticket in August. The BBR Karting driver traveled to Spain with DD2 Masters Team USA member Derek Wang and also tested on-track with Team Canada driver Gianfranco Mazzaferro. A Sodi Kart was not available from the local kart shop, so Robb tested Birel kart for three days. Robb compared to the course to Sonoma, Chilliwack and West Palm Beach – with no elevation changes – and enjoyed it. It has plenty of high speed and low speed corners, with optimal passing zones. The surface is smooth, however the curbs are very rough. It should make for an exciting 2014 Rotax Grand Finals.

Three drivers are using this weekend to test for the Grand Finals here at the Pan Am. Austin Versteeg drove a Sodi Kart for a few practice sessions this week, but changed back to his Kosmic on Thursday as the Junior field is racing for a 2015 ticket. Michael Ilavia is the only driver in DD2 racing with a CRG, and sticking to the Grand Finals set-up window. The rest of the field is going for the win, with a number of the drivers already qualified but sticking with their own set-ups. Ken Maxfield is also making his first Grand Finals start, using this weekend to get accustom to the DD2 Masters ride after winning the Masters Max category at the US Grand Nationals. The Utah driver is also learning the track as well, visiting the GoPro Motorplex for the first, working with the KartSport North America operation.

Walk-Up Entries
A number of big names have come into the mix as the final practice day began. With Rotax Grand Finals tickets on the line, the drivers make every effort to make it to the event. The total is now up to 138 entries in the seven categories, with new drivers in each division. Two names in Junior Max added their names to the entry list, with Texan Parker Chase (FA Kart) and Theo Chick from Maryland.

Canadian champion Zachary Claman-Demelo (Intrepid) already has a ticket, but is looking to add another victory to his CV. Fellow Team Canada driver Bryce Choquer (Kosmic) will also get some time before heading to Spain. Longtime Rotax competitor and former Team USA driver Louie Pagano is still looking for his 2014 ticket for the Grand Finals, with the full Dallas Karting Complex/Sodi Kart USA team behind him. Roger Ralston Jr. (FA Kart) has spent a lot of time this year at the GoPro Motorplex, with two major wins at the facility in April with the KartSport North America operation.

DD2 field nearly doubled, including Canadian champion Jeffrey Kingsley will bring his PSL Karting/CRG for a shot at the Pan Am title. European star Ed Brand (Intrepid) has made his way from the UK. Cold Stone US Grand Nationals fourth place finisher Jonathan Kotyk (Tony Kart) finished fourth, earning the ticket to the Rotax Grand Finals. The Ocala Gran Prix driver is gunning for more practice in the DD2 ride. Young gun Nathan Adds (Sodi Kart) was impressive at the Grand Nationals and throughout the season in Texas.

Unofficial Practice/Schedule Change
Thursday was just that…unofficial. The GoPro Motorplex ran the practice through the day, with the MAXSpeed Group taking over track operations Friday and for the rest of the weekend. The schedule has changed, giving the six race groups two practice sessions in the morning with Qualifying to follow the lunch break. The top six from Micro, Mini, Junior, Senior and DD2 will move into the Super Pole session – where they have two laps to determine their starting order for the three heat races. Saturday will host all three qualifying races – eight laps for Micro/Mini/Masters with the others going 10 laps. The points will be tabulated from those to set the grid for the Prefinal on Sunday.

No timing system was run during the day, so much of the lap times were unofficial with everyone gunning to be the quickest out there. EKN is working on a number of stories from the paddock, which will be published Friday morning.