EKN will once again be providing the popular Trackside coverage. Be sure to follow the Official Discussion Thread for top-10 results of every on-track session as the event unfolds, and follow all the coverage through the EKN Event Page. Also, get updates through Facebook, Twitter and Instagram. Three different preview articles will be published to open up the Cold Stone US Grand Nationals coverage. Junior Max, Mini Max and Micro Max are previewed first, with DD2 Masters and Masters Max on Tuesday. Wednesday is a look at Senior Max and DD2, with coverage beginning on Thursday. 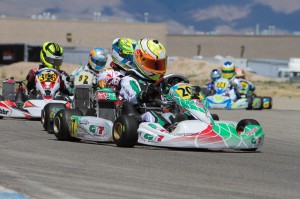 Anthony Gangi Jr. can become the first driver to win Micro, Mini and Junior at the US Grand Nationals (Photo: Ken Johnson – Studio52.us)

Can-Am Karting Challenge Junior Max
The list of former Junior Max national champions is one of talent that dates back to 2002. Twelve different drivers are among the list of former Grand Nationals winners, with a new driver set to join them following the action in Tooele. Forty drivers are ready to battle and compete for the top step of the podium this year, with a good handful already having experience standing there at other events throughout the season, along with gaining titles in the beginning steps of the Rotax Max Challenge ladder system.

Four drivers have won at the US Grand Nationals previously, either in the Mini or Micro Max division and are searching for their first Junior Max crown. New York driver Anthony Gangi Jr. is attempting to join the prestigious names at the top of the list with multiple Rotax titles. Gangi (GT7 Motorsports/Tony Kart) is the only driver to win the event in Micro and Mini Max in this year’s field, and ready for his debut in the Junior Max category after sitting out last year’s event during a transition from Mini to Junior. Gangi was victorious at the Rotax Summer Shootout in June, putting him among the favorites on the weekend. No stranger to the Miller Motorsports Park is California driver Christian Brooks. The Nash Motorsportz/Tony Kart pilot secured his only Rotax Grand Nationals title in the 2011 edition at MMP, winning the Mini Max division. Brooks came three points short of winning the Rotax Challenge of the Americas championship this April, and the Rotax Grand Finals ticket. There is no doubt he his hungry for the top step this weekend.

2012 Micro Max Grand Nationals champion Nick Brueckner is set to make his Junior Max debut at the national championship event. The MRP Motorsport/Birel driver from Texas has been busy in 2014, gaining as much Junior level experience as possible. He faired well during the Rotax Summer Shootout, earning two top-five results including a podium finish. Patricio O’Ward became the first ever US Rotax Grand Nationals Micro Max champion at the USA International Raceway in Wisconsin at the 2008 edition. After progressing up the ranks, O’Ward took on open wheel racing for some time but is back to karts again, working with Chase Racing aboard a FA Kart.

Aside from Gangi, the other driver to pick up a win at the Rotax Summer Shootout was 2014 Rotax Challenge of the Americas champion Austin Versteeg. The Rolison Performance Group/Kosmic driver has had this event circled on his calendar since the announcement, ready to show well at his home track. Versteeg, already a member of Team USA for the 2014 Rotax Grand Finals, is going all out for the victory to claim his first US crown. The three podium finishers from last year have moved up the Rotax ranks, putting Florida driver Ryan Norberg as the top returning driver from the 2013 main event. Norberg was among the quickest drivers in the feature, coming up just short for the podium but gained a spot on Team USA for the Rotax Grand Finals Returning with the Ocala Gran Prix/Tony Kart operation, he’s one drivers stop watches will be following. The same can be said for his teammate Austin Garrison, who has earned some impressive results already in 2014, placing third in the Florida Winter Tour point standings. 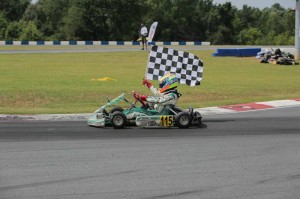 Chase Racing Mini Max
It was the third edition of the US Rotax Grand Nationals that the Mini Max engine and class was introduced. The category has been the stepping stone for a number of young drivers to gain experience racing on the national scene, garner their first national title, and turn it into a path toward success in karting. In the past 11 years, we have not seen a single driver repeat as the class champion. This year, a new opportunity lies with Michael d’Orlando.

The New York driver scored a monumental victory last year at the GoPro Motorplex for his first ever national crown. He has been among the top Cadet level drivers all season long, and the Koene USA/Tony Kart pilot is certainly at the top of the contender list. Joining d’Orlando as a former Rotax champion is fellow New Yorker Dylan Tavella. The GT7 Motorsports/Tony Kart driver scored the Micro Max championship last year, and is already making a name for himself in the Mini Max category. He traveled west this winter, securing the Rotax Challenge of the Americas championship, and won the Sunday main event at the Rotax Summer Shootout. With race craft skills beyond his age, Tavella is sure to be on the hunt on Championship Sunday.

Scoring the other victory last month at the warm-up event in Tooele was last year’s runner-up Enzo Fittipaldi. The race went down to the wire last year with Fittipaldi (Orsolon Racing/Tony Kart) coming up just short. Enzo claimed the feature win at the Shootout in Saturday’s round of racing, and backed it up with a top-five the following day. Among the other drivers to earn strong results at the Rotax Summer Shootout include Maryland driver Kaylen Frederick (Pilot ONE Racing/Tony Kart), who has been all over the eastern half of the country racing this season. Fittipaldi’s teammate Riley Dickinson was another driver to earn a top-five finish in last month’s race, and the Texas driver enters as the Texas ProKart Challenge point leader.

A number of Mini Max rookies make up much of the field in Tooele. Michael d’Orlando’s brother Nicholas has picked up quickly in his Mini Max rookie season, and is among the contenders. Nicholas finished runner-up in Micro Max to Tavella last year, and is back to make it a Koene USA 1-2 finish. Harry Coulton is another rising Mini Max rookie. The Florida driver was the provisional winner in Micro Max last year until a carburetion issue in tech removed him from the results. Putting that behind him, the MRP Motorsport/Birel driver was the top American finisher in the Florida Winter Tour championship standings in his rookie campaign. Utah driver Payton Durrant is another driver that circled this event, looking to take advantage of home track knowledge. The MRP Motorsport/Birel was a top-five finisher last month against the Rotax Grand Nationals competitors warming up for this week, and the Mini Max rookie is ready for podium contention. 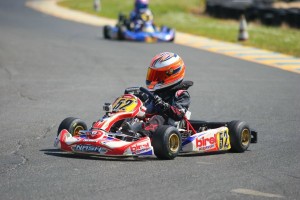 Jak Crawford is among the favorites in the Micro Max category (Photo: SeanBuur.com)

Nash Motorsportz/Precision Works Micro Max
The Micro Max category was added to the United States Rotax Max Challenge program in 2008, and has increased in numbers every season with a new crop of young, eager racers ready to take the first step of the Rotax ladder system. Junior Max driver Patricio O’Ward was the first to step to the top of the podium follow the Rotax Grand Nationals, and this year will be another first time champion.

The 2014 season has been phenomenal for Texas driver Jack Crawford (Birel). After going six for six in main events to clinch the Rotax Challenge of the Americas, and has continued winning at every stop he makes, including the Rotax Summer Shootout. Other championship leaders coming into the weekend also include Reece Gold (Tony Kart). The Florida driver picked up the FWT title in Micro Max this winter. Josh Pierson (Tony Kart) leads the Rotax Can-Am ProKart Challenge standings after six rounds, and won a free entry at the recent event in Canby, Oregon. He is among four drivers representing Oregon. Another name to watch is Sebastian Montoya (Birel), the son of IndyCar driver Juan Pablo Montoya. The young driver finished eighth in last year’s event, looking to improve his results while his father will be racing at the Honda Indy Toronto event.

Others will no doubt step up throughout the weekend as these young drivers take the first step up the Rotax Max Challenge program.