Included with the EKN Trackside Live coverage are articles and reports on the weekend, including a detailed look at the fields that will compete in all eight divisions. The first preview article looks at the four Yamaha divisions, with the TaG previews to follow tomorrow. 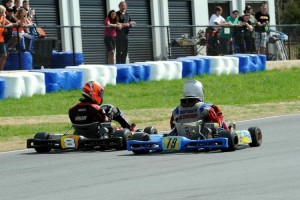 Jarsocrak and Pesek are the top two in the Yamaha Pro championship chase (Photo: DavidLeePhoto.com)

Yamaha Pro
Another solid field of drivers is set to battle for the $1,000 check for the most points on the weekend at the MRP facility, which is among the perfect circuits for Yamaha racing. The championship chase is tight with six drivers within 135 points at the top of the order. Leading the charge currently is Senior rookie Brandon Jarsocrak (Mike Doty Racing/Haase). The Pennsylvania driver was among the quickest during the opening weekend in Mooresville, coming away with a third and second place result in the main events. His two podium finishes, combined with the heat race results, have him 40 points ahead in the standings over Round Two winner Dakota Pesek. The Top Kart USA driver triumphed after starting 18th in the 17-lap event for an impressive victory.

Derek Dignan (KartSport North America/FA Kart) was a top qualifier and finished with a fourth place as his best result on the weekend to enter the weekend third in the championship. Behind him, it’s just 20 points that separate three others. Camden Speth (Comet Kart Sales/FA Kart) swept the opening round, but a DNF on Sunday kept him from scoring more points. Privateer Collin Griffin (Tony Kart) is fifth with Tony Jump (KartSport North America/Arrow) sixth. All have time at the MRP facility, which will make each and every session that much more exciting as the championship chase unfolds. Darin Marcus (Franklin Motorsports/Merlin) and Killian Keaveny (Top Kart USA) won at the recent Route 66 Sprint Series event, which featured 25 drivers both days.

A western invasion will take place in South Bend with two California drivers set for an attack on the best Yamaha drivers this side of the Mississippi. ART GP America pilots Andrew Wiener and Kyle Kuntze will make their USPKS series debut, both having previous success when traveling east. Coming up from Texas to make his series debut is Austin Osborne (Verde Speed Resources/Tony Kart). The Senior rookie was a winner at this year’s Lone Star Grand Prix and could be the wildcard on the weekend. 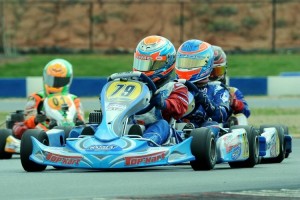 Yamaha Junior
The opening weekend at the GoPro Motorplex was a two driver show with David Malukas and Zach Holden leading the way. The two Top Kart drivers were in first place throughout the two rounds of racing, and split the feature wins. Malukas won the feature on Sunday, and accumulated the most points to hold an 80 point advantage over defending series champion Holden.

The two hold a stronghold over the rest of the field, who are looking at this weekend to even the score. Third in points is Mooresville driver Max McLaughlin, who will be absent in South Bend after an impressive opening weekend. That promotes Birel drivers Matt Solarczyk and Mike McAndrews as the lead challengers in the title chase. Solarczyk best result was a third with McAndrews a fourth, both on Saturday. McAndrews was just named as an instructor at the MRP Speed Schools program, based at the North Liberty facility, and won at the recent Route 66 Sprint Series event. Brandon Lemke (Merlin) was the other winner that weekend, and is looking to improve on his results from GoPro event. One wildcard to watch is Becker Reardon (Tony Kart). After living at the facility the last two years, this could be his weekend to shine after scoring his best result at Mooresville with a third place result. 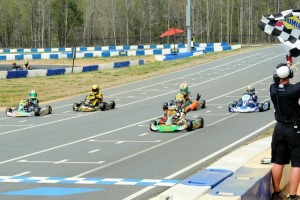 Yamaha Cadet is sure to provide more exciting finishes this weekend (Photo: DavidLeePhoto.com)

Yamaha Cadet
Cadet racing is always a nail-biting experience, and the Yamaha division at the USPKS program is no different. Last year saw six different winners in eight races. The weekend in Mooresville saw five different drivers at the top of the order in the eight sessions with seven drivers currently within 180 points in the standings. Dylan Tavella (Tony Kart) came away with the best results from the weekend and leads the point championship. Tavella won Round One and was a close second on Sunday. Defending champion Sam Mayer (Merlin) was the victory in Round Two and currently sits just 15 point out of first place.

John Paul Southern Jr. (PCR) was quick all weekend, placing runner-up on Saturday but did not manage to lead a single session in either round. The Ohio driver enters the weekend third in the standings, looking to close in on the top-two. Merlin drivers Alex Bertagnoli and Austin Schaff were among the contenders at the GoPro event, each earning a heat race win Saturday. They are fourth and seventh in the standings, each winning at the Route 66 Sprint Series event. Round Two top qualifier Lance Fenderson (Benik) and Devin Boutot (Tony Kart) are fifth and sixth in the standings, looking to improve their placement over the South Bend weekend. 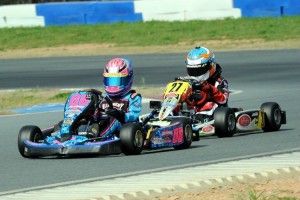 Luca Mars and Tyler Maxson look to add to their wins from GoPro Motorplex (Photo: DavidLeePhoto.com)

Yamaha Rookie
Numbers have increased for the second stop of the USPKS program in the Rookie division. Thirteen drivers will compete in South Bend, with seven making their first 2014 start. Three drivers stood out in Mooresville, with Luca Mars (Praga) and Tyler Maxson (Tony Kart) splitting the victories. Mars swept the action Sunday to assume the point lead after Maxson won all the races Saturday. They are separated by 10 points heading into the weekend. Gunnar Bischoff (Haase) was the top qualifier on Saturday and finished third behind the top two at the opening rounds. 2013 race winner Aiden Lindley (Birel) returns for his first series race, and could be one of the wild cards on the weekend.