A glimpse into the opening weekend of the sophomore USPKS season 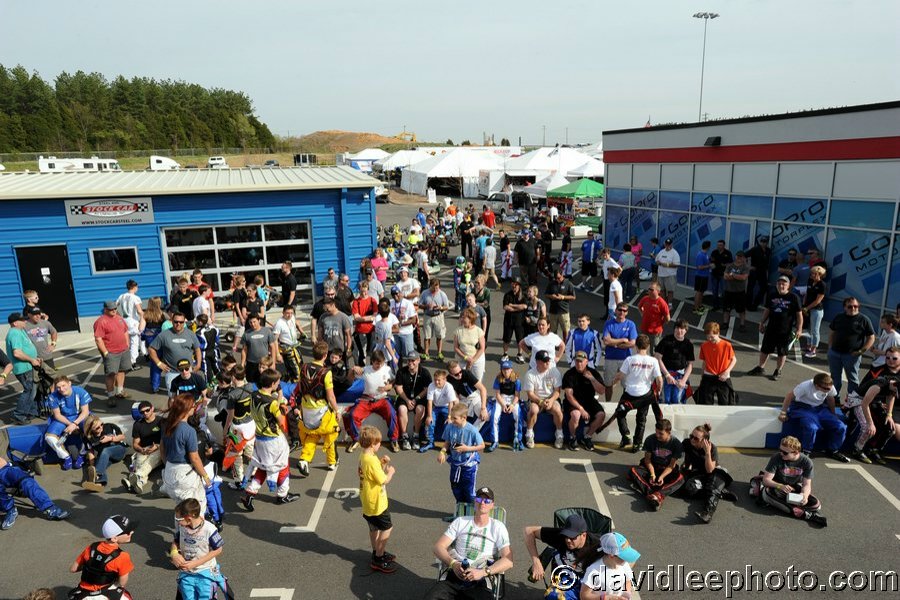 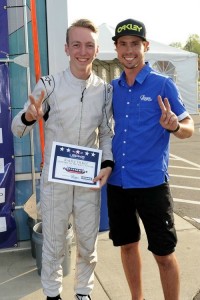 This weekend was the start of the sophomore season of the United States Pro Kart Series. A total of 169 entries each day was a record turnout for the program, as the drivers visited the GoPro Motorplex once again to begin the eight-round championship. The event, presented by GoPro, welcomed picture perfect weather throughout the weekend. Each category took to the 7/10-mile course for more than 70 laps of racing on the weekend, in addition to five practice sessions on Friday and a five-minute qualifying round each day. As it was last year, the paddock was buzzing with excitement, and the USPKS staff made it feel more than just another kart race with numerous banners, flags, and more.

A ‘Pro’ Class Indeed – At 38 drivers, the headline Leopard Pro category was deep with talent, and was still missing a few drivers who could have been racing, but were instead wrenching. This weekend saw the younger competitors in the field shine, including double race winner Roger Ralston Jr. (KartSport North America/FA Kart), who earned two tickets toward the IAME International Final drawing with the Praga factory team. Dustin Stross (Ocala Gran Prix/Tony Kart), Elliott Finlayson (Koene USA/Tony Kart), Derek Dignan (KartSport North America/FA Kart) and, of course, defending champion Kyle Kalish were among the quick drivers on the weekend. Watch for them to challenge for the championship this season. What set apart the Pro categories from the others was the tough fight for position. At the front of the field in both Leopard and Yamaha, if a driver gave an inch, the others would take it. The tight circuits at South Bend and Pittsburgh are going to provide some of the best racing we will see all year.

Home Sweet Home – GoPro Motorplex is home to the KartSport North America operation, so it was no surprise to see them at the top of the order. It wasn’t just one driver, however, it was a host of drivers in all different categories, aboard the Arrow X3 Vegas and FA Kart chassis. Leopard Pro had veteran Brandon Jones as the fast driver in Happy Hour on Friday. Derek Dignan arrived Friday night after a week in Europe for a school function, and he was fast in both Leopard and Yamaha. Jacob Knueven and Jake Donald made it a KSNA 1-2-3 on Sunday, following Ralston’s FA Kart. Tony Jump made his debut on the Arrow X2 in Yamaha Pro, and was among the quicker drivers in each main event. Neil Verhagen showcased the X3 Vegas as well, battling for the race win to continue his first season in the Junior ranks. 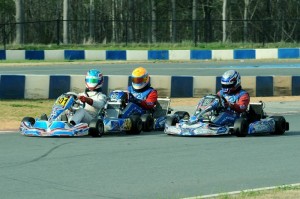 Don’t Call it a Comeback – TJ Koyen has suffered a difficult few events over the past seven months. Injuring his ribs at the USPKS finale in September, he re-injured them at the SKUSA SuperNationals two months later. Four months to heal should have been enough for the young, yet aging 23-year old from Wisconsin. Making his debut on the ART GP machine, Koyen stayed in contention throughout the opening round and trailed the leaders in the main event. A strong third place finished was followed by pain, as his left side ached and became so severe that he sat out Sunday’s events after trying to qualify the kart. He was diagnosed with bruised ribs instead of cracked or broken ribs, and now the gameplan of finding more comfort is the task leading up to the next event.

One-Armed Maverick – Defending Leopard Pro champion Kyle Kalish showed how and why he scored his first national title a year ago – consistency and race craft. The Franklin Motorsport/Merlin driver overcame less-than-hoped-for qualifying efforts both days to race his way forward. Starting eighth on Saturday, he fought forward to the fourth position. Sunday was a memorable 20 laps for the Illinois driver. Nearly launching up and over another competitor as the field fought for position through the opening corners, Kalish continued on to fight his way forward and into the lead early. It was only a loose airbox that kept him from winning the race. Driving the last quarter of the race with one hand on the wheel, and one on the airbox, Kalish nearly pulled off a stunning victory. Finishing fourth, he received a lot of respect and complements walking back to the pits.

iKart Growing – The weekend in Mooresville brought a number of new iKart machines to the USPKS program, following the success of Jesus Rios Jr. and Mike Giessen in Leopard Pro. Roughly 10 drivers from the New York and New Jersey areas contested four categories over the weekend. John DaCosta was among the contenders in the new Leopard Challenge, with the brother/sister tandem of Mark and Julia Boos in Leopard Pro and Junior. With the brand reaching both coasts of the United States, iKart will no doubt be seen more often on the national stage. 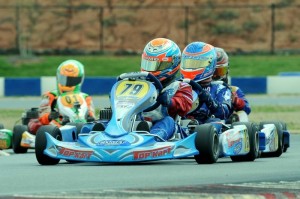 Top Kart has won 9 of the 10 Yamaha Junior feature races at the USPKS (Photo: DavidLeePhoto.com)

Near Perfect in Junior – Going three-for-four in Junior action at the USPKS opener is a great start for Top Kart USA drivers Zach Holden and David Malukas. Holden, the Yamaha Junior defending champion, scored one of the main event victories on the weekend in a thrilling race to the stripe. Malukas won Leopard on Saturday and Yamaha on Sunday to earn the overall point total checks for each category – winning a cool $1,000. To date, Top Kart has won nine of the 10 Yamaha Junior USPKS feature races. It was nearly four wins on the weekend for Top Kart in Junior action, until Sunday’s Leopard race came down to the last few corners with Anthony Gangi Jr. stealing the show in the end. Moving forward, it will be interesting to see if anyone or any other brand can halt the dominance of Top Kart.

Curtain Rises on Mini Rok – A total of 26 drivers traveled to Mooresville to be part of the Mini Rok Cadet debut with the USPKS. Andre Martins of OTK USA/Vortex and the Orlando Kart Center was on-hand to offer assistance to those racers and their families with service and parts throughout the weekend. The category provided some exciting racing, despite a number of false starts. One of the more experienced racers in the field – Dylan Tavella – showed his racecraft by securing the victory on both days. With the option now to run two categories, many of the Yamaha Cadet parents elected to place their young drivers in the Mini Rok Cadet division.

Merlin Nation 2.0 – The newest crop of young drivers under the Merlin Nation banner are sure to give Tavella a challenge throughout the season. Defending Yamaha Cadet champion ‘Super’ Sam Mayer, Alex Bertagnoli and Austin Schaff were among the frontrunners all weekend. Anytime a driver pulled away from the field, Merlin Nation jumped in line and reeled them in. Drivers like Kalish and Yamaha Pro podium finish Shawn Sharkey were among the many members who made up the original Merlin Nation posse. These veterans hope to lead a new crop of drivers up the ranks so that they will continue the long-time power presence of the Merlin brand.

For complete coverage of the opening weekend for the United States Pro Kart Series, visit the EKN Event Page.