After over a year of preparation and competition, five American Karters will travel to Lonato Italy this week to compete in the 11th Annual Rok Cup International Final.  Having won their entries and travel arrangements as a result of their efforts in various Vortex Rok sponsored programs around the United States over the past 12-months, the team of five drivers will be a part of over 300 Rokkers from no less than 36 countries over four continents, all vying for the title in one of five Rok Cup Categories.  The following is an introduction of the 5-driver team that will represent the United States at South Garda this week.

Racing karts since 2008, Hunter quickly moved up the speed charts through the various development categories, since the age of 5, landing in SKUSA’s popular TAG Cadet class.  The California native mounted a successful campaign in 2012 winning the TAG Cadet Category in SKUSA’s Triple Crown, the Streets of Lancaster Grand Prix, ProKart Challenge, and the ProTour.  Champion of all three SKUSA programs, Hunter earned the fully-funded trip to Italy to take on the world in Mini Rok.  In addition to his Mom and Dad, Hunter is supported by Pinzini Race Engines, Tracklogic Motorsports, and ItalCorse. 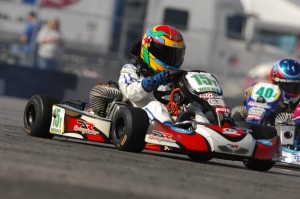 Also a regular of the popular SKUSA programs, Hayden is another threat in the California karting scene, currently Junior 1 Champion of the Kerman Kart Club, and a regular of the popular Los Angeles Kart Club.  Through his dedication to his motorsports career, and winning in SKUSA’s Pro Kart Challenge California in 2012, the 11-year old won the entry and trip to Italy for the Mini Rok Category, an opportunity his supporting family could not pass up.  Along with his family, Hayden is supported by PKS, Race Kart Engineering, and Pitts Performance.

As a full-time student in the Seattle, Washington area, Ignacio has juggled his studies and his racing throughout the 2013 Competition Year.  Participating throughout the country all year from the A-M Racing stable, Ignacio honed his skills in the Rok Junior Category through his participation in the official Rok Cup USA Region Florida Karting Championship Series, topping his efforts with a win in the Rok Cup USA Championship Event.  With his National Title in Rok Cup, Ignacio earned the fully-funded trip to the Rok Cup International Final.  Ignacio will be the sole Junior carrying the USA flag in Italy this year.

Even with a full schedule of school, Swimming, and Karting, AJ has managed all his commitments while still coming up with a National Championship in the Rok Cup USA program.  A driver for the Myers Real Estate team, AJ has been diversifying his driving talents for the past 8-years, most recently in Rotax, Shifter and Rok Cup Categories, winning at regional and national levels.  His dedication proved dominant at the Rok Cup USA Championship Event this year, where he owned the checkered flag to earn the entry and the free trip to Italy.  Proving his dedication to his racing, AJ and his family traveled to Italy early to get valuable track time at South Garda in preparation for the Rok Cup Final. 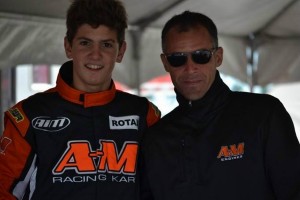 As a 25+ year veteran of the sport, Ariel is a racer through his entire being. A founder of A-M Racing and A-M Engines, Ariel is also a regular of auto racing in the South Florida Region, in addition to his karting disciplines.  Although Ariel dominated the Rok Master Category in the Florida Karting Championship Series, when it mattered, Ariel took the win at the Rok Cup USA Championship Event, earning him the all-expense paid trip to South Garda Italy.  Although Ariel is the Rok Master USA Champion, he will participate at the Rok Cup International Final in the Super Rok Category, vying for the crown for drivers over 30-years of age.

Florida native Mathias Ramirez won nearly every Rok Cup Mini Rok event he participated in in 2013, along with Regional Championships in both the FKCS Region and the Orlando Kart Center Region.  Unfortunately, with a very busy racing schedule, Mathias elected to remain state-side this year to dedicate his racing to programs he committed to earlier in the year.

Bonus competitions at this years’ Rok Cup International Final, include the Rok Nations Cup for Categories where two drivers from a country will score points for their country, gaining the best score for their class, (Mini Rok excluded).  This year, Super Rok drivers AJ Myers and Ariel Castro will represent the United States to race towards bringing the Rok Nations Cup back with them to the United States. 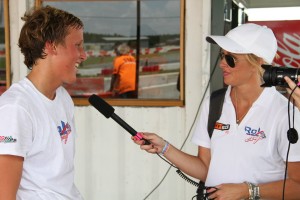 AJ Myers will take part in the Rok Talent competition

Another unique benefit of the Rok Cup program, unmatched anywhere in Karting is the Rok Talent Award Competition.  Drivers throughout the 2013 Competition Year who dedicated their efforts to promoting karting and their racing program with website updates and race results at www.RokTalent.com will compete in a Karting all-around competition the day after the Rok Cup International Final.  In yet another program sponsor by Vortex Rok Cup, and free to Rok Talent Award hopefuls, participants will be judged on a number of categories which drivers are faced with as they progress through the ranks of motorsport, such as how they present themselves to the media under changing or adverse conditions, as judged by a panel of prestigious professionals from the motorsports industry.  Two winners are selected from the competition, who will receive a fully-funded entry into the CIK Championship Events in 2014.  This year, AJ Myers will represent the United States in the Rok Talent competition.

The culmination of a year’s worth of dedication and success earned these drivers their spot to represent the United States next week at the famed South Garda facility in all these unheard-of opportunities.  Rok Cup USA will be traveling with the Team, posting pictures and updates throughout the week.  To monitor the team’s progress, or to interact with the team while they are in Italy, head over to the Rok Cup USA Facebook or Twitter pages.  Rok Cup USA will have the drivers monitor the postings all week long so fans back in North America can interact real time with the drivers as they challenge the world.