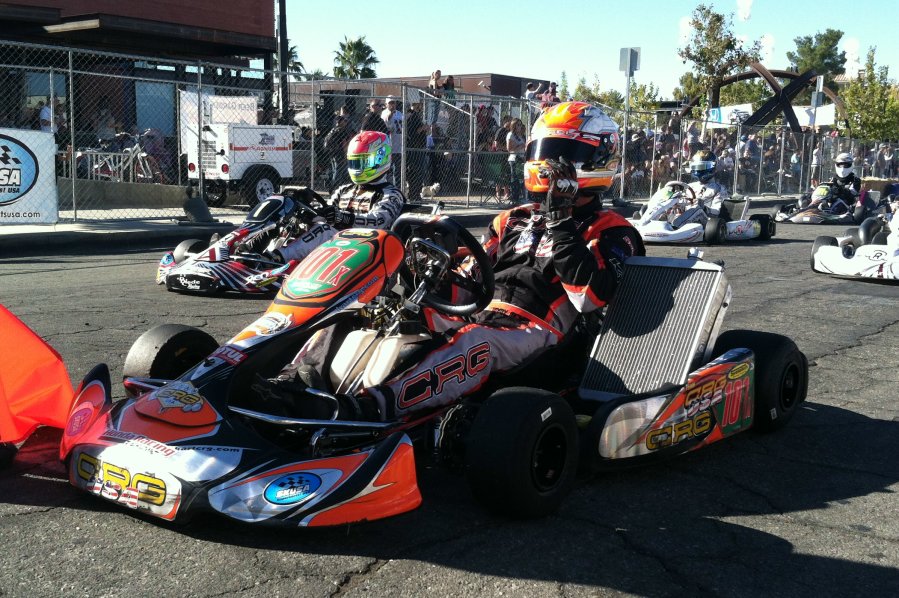 Nearly 150 drivers make up the field for the 2013 Streets of Lancaster Grand Prix, and all had the pleasure of trying to tame the wild beast that is the street race. Under perfect racing weather conditions, the Superkarts! USA California ProKart Challenge series finale kicked off in the southern California city, with the first of the two-day event went into the books. Practice, qualifying and the first heat race were on the docket, in addition to the many VIP rental kart races taking place into the evening hours. The major goal for most of the drivers was to stay out of trouble. Some did, while some did not fair as well. One major incident involve TaG Senior driver, where a brake issue put him into the turn three wall very hard, coming away with a badly broken arm. Everyone in the karting community would like to wish him a safe and speedy recovery as he goes ahead. On the results side, a number of familiar faces found themselves at the front of the field with many of the same contenders from a year ago at the top of the order.

The TaG Cadet division was the first category to hit the track for qualifying on the day with a record 24 drivers taking to the course for the Streets of Lancaster Grand Prix. A number of drivers take their turn at the point, as the track was getting faster with the session closing. Defending winner Hunter Kelly (Italcorse) held the provisional pole position with just three minutes remaining, and was able to get into the 40-second barrier in the shorten course for the young drivers. On the final lap, Kelly went even quicker as he laid down 40.922-second lap to secure the top spot. Trenton Sparks (FA Kart) was quicker the final circuit as well, moving up to second in the order to drop Wyatt Couch (Top Kart) to third. Jagger Jones (Tony Kart) and CPKC point leader Ryan Schartau (Top Kart) capping off the fast-five.

The field was clean through the opening corners to start the first heat race, but trouble struck on lap two as Dylan Tavella (Tony Kart) spun into the outside of turn three, collecting five others – including Schartau and Jackson Lodgson (Tony Kart). Out front, Kelly was joined by Sparks and Couch, but was able to pull away to a solid win. Jones finished fourth as he edged out Myles Farhan (DR Kart).

Casadei drove in the lead the entire 10 laps of the heat race, scoring the overall and S3 win. Campbell and Williams fought for second overall and the S5 win, with Campbell taking the spot. Nicklas drove to fourth, second in class while McKinney completed the top five. Luke Bianco (CRG) was the top S4 Magnum qualifier, and won the class as he finished sixth overall.

Last year’s winner Ethan Wilson (FA Kart) set the tone in the opening laps of the 10-minute TaG Master qualifying session. The first kart on the track, he was at the top of the charts early on with CPKC point leader Billy Cleavelin (CRG) in the provisional second position. By his fifth lap, he posted a 44.198-second to secure the pole position. Cleavelin ended up second with Kevin Manning (MMK), Steve Brackett (MMK), and David Barbosa (CRG) rounding out the fast-five.

The top three were able to pull away from the rest of the field at the start of heat one with Wilson leading Cleavelin and Manning. Will Jadiker (CRG) made it exciting for all the fans and crew in turn five, as he spun which sent the rest of the group shuffling around and into the barriers. That put Brackett back to fourth until Andy Seesemann (Arrow) took advantage and moved up from starting 12th after missing qualifying due a celebration hangover for his 43rd birthday. Out front, Wilson and Cleavelin ran nose to tail with Manning losing ground each lap. Cleavelin stayed on the bumper of Wilson, as they ran 1-2 to the line. Manning fell back four seconds off in third as Seesemann held to fourth. A shake up behind him for fifth say Paul Grey (FA Kart) move into the spot on the final circuit.

The provisional pole was shuffling during the first half of the 10-minute qualifying session for the TaG Senior class. ART GP America drivers Chris Cricca and Andres Ceballos bounced back and forth in the first five minutes. They continued to hold the top two spots with Cricca able to secure the position with a 43.457-second lap. Ceballos was off by two tenths with Canadian Parker Thompson (Energy) making a late charge to third after a final practice wreck. Grayson Browne (Energy) was fourth with Alejo Fernandez (Energy) in fifth. Matt Johnson (Tony Kart), last year’s winner, ended the session in 17th suffering from a bent up frame they thought was unharmed.

The heat one race began with a turn one wreck took out Cricca, Browne, and Austin DeMent (FA Kart) on the opening lap with Ceballos leading the way with Wesley Boswell (Top Kart) up to second spot over Travis Lowe (Kosmic) with Thompson back to fifth behind Austin Elliott (Top Kart), who was up from 11th on the grid. Boswell put the pressure on Ceballos as they reached lap five, as he looked for a way to the top spot with the top two away from the fight for third. Ceballos continued to run a defensive line, all the way to the checkered flag and crossed the line first, but officials penalized him for blocking and put Boswell into the win column. Lowe would end up third over Elliott with AJ Juergens (Intrepid) fifth from 14th. Andrew Wiener (ART GP) moved up from 16th to sixth, with Johnson right there as they put Thompson back to eighth.

Qualifying for TaG Junior went down to the wire with Noah Grey (Kosmic) jumping to the top of the order in the final few laps to score the pole position. His 44.460-second lap was best of the session. Defending race winner Brenden Baker (ART GP) from nearby Palmdale was second, just 39 thousandths off the top time. New York’s Anthony Gangi Jr. (Tony Kart) moved up in the final minute to finish third, as Nathan Seegrist (Tony Kart) and Justice Lepe (Tony Kart) completed the fast five.

It was a clean start for the large group to being the heat one race, as Gangi jumped from P3 to P1 on the opening circuit, dropping Grey to third behind Baker. Lap after lap, Baker and Gangi went back and forth for the lead in turn five, putting on a show for the fans. By lap five, Grey went from third to first to move ahead of the two dueling drivers with Williams and Lepe trailing. Baker returned back to the point, once again with a move in turn five, nearly losing control of his ART GP machine under breaking. He then ran a defensive line down the long 1000’ straightaway. That triggered a move for Grey, on lap eight, as he shuffled Baker back to fourth with Gangi now the lead challenger. Taking the white flag, Gangi was the new leader as they negotiated the final lap. He would hold on and cross the line first, but was penalized a position for blocking which promoted Baker to first. Lepe finished with Williams also able to work past Grey on the final lap for position.

Seventeen drivers made up the field of the S4 Master group, and it was SoCal native Mike Mantel (Tony Kart) setting the pace. With a lap of 41.201, he secured the pole position. In fact, the top four drivers all recorded a lap within the same tenth of a second – all 41.2-second laps. Arizona driver Nick Firestone (Tony Kart) was second with Billy Musgrave (Tony Kart) and late sign-up Trevor McAlister (Praga) right there. PP Mastro (Italcorse) completed the fast-five.

Mantel was slow off the line to begin the heat race and bottled up the inside line. Musgrave, starting third, drove over-top of Mantel and lost a number of spots as Firestone took the lead over Mastro with Mantel in third. McAlister, last year’s victor, was on the move however as he jumped into the second spot by the end of lap three, trailing only Firestone. Down to turn five as they completed lap four, McAlister dove inside of Firestone to take the lead. This made it a four driver fight with Mastro and Mantel right there. T-Mac however was quick once out front and began to drive away from the others. Mantel however got to the second spot was able to run down McAlister. He would take the lead as they received the white flag, but McAlister took it over on the final circuit to earn the win. Firestone was third with Mastro and Cooksey completing the top-five.

Thirty-one drivers filled out the S1-S2 group as the headline event of the weekend. Jimmy McNeil (CRG) was the provisional pole sitter, coming into the session as the top driver in final practice. Three minutes in, Billy Musgrave (Tony Kart) went to the front but would not record any more laps, and began falling down the order. McNeil returned to the top with defending race winner Fritz Leesmann (CRG) moving up with him. S1 rookie Alec Gumpfer (Tony Kart) and S2 winner last year Augie Lerch (Tony Kart) filled out the top five with Musgrave. They would end up that way with McNeil’s 40.252-second lap standing.

The start was clean as McNeil and Leessmann led the way with Musgrave up to third over De Losier and Lerch. Gumpfer was involved in a wreck on lap two, collecting Curtis Paul Jr. (Tony Kart) and two others. Once the race was restarted, McNeil was slow at the drop of the green with four laps remaining, with Leesmann moving around for the lead. McNeil would move back to the lead as they took the white flag and was able to hold on to the victory, dropping Leesmann to second. Musgrave was a close third with De Losier moving into fourth, earning the top spot in S2 over Lerch.

Head over to the EKN Facebook and Instagram for photos and videos from the day, and watch tomorrow for more updates and content as the event completes.