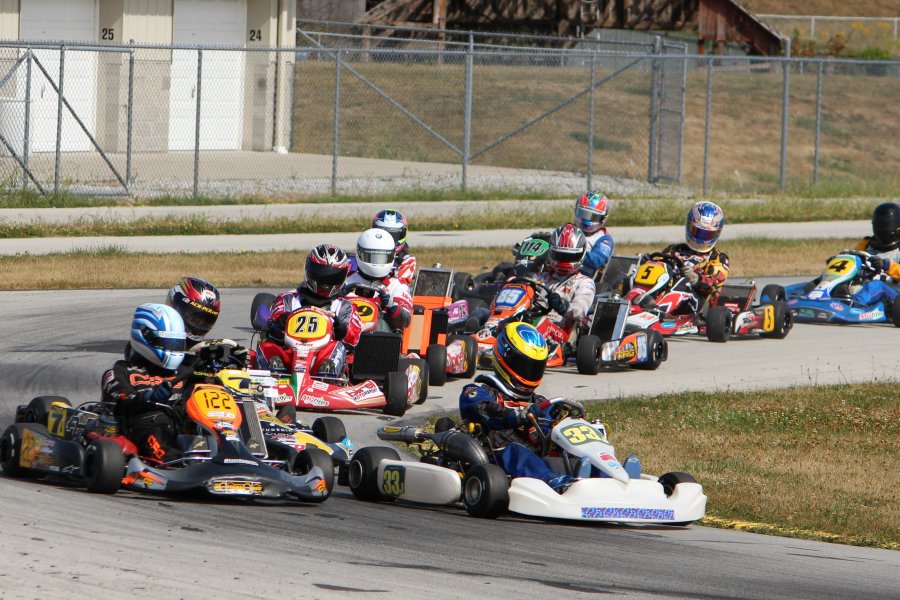 The first annual Midwest Shifterfest brought together a variety of drivers from around the area to New Castle Motorsports Park (Photo: Jill Nufer)

The first annual Superkarts! USA Midwest Shifterfest took place at the popular New CastleMotorsportsPark in New Castle, Indiana over the September 13-15 weekend. Racers from across the Great Lakes area and other parts of the country traveled to the Racing Capital of the World to take part in the Midwest ProKart Challenge season finale, during the first gathering of what is sure to become an annual event for the Superkarts! USA organization.

“The atmosphere during the weekend was incredible! Everyone was there to have a good time, and there was some awesome racing,” stated Superkarts! USA’s Stan Bryniarski. “There were so many finishes that came down to the wire, and in each case the racing was hard-fought but clean. So many people came up to me following the great podium celebrations and said they will race again next year. It was definitely a successful first outing for the Midwest Shifterfest. I know that there is plenty of room to grow it into another respected and annual event for years to come.” 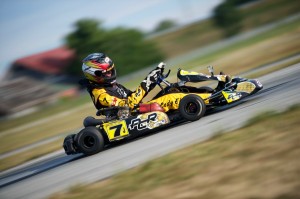 The full slate of Superkarts! USA categories were joined by the Open Shifter division, which welcomed KZ and modified Moto engines to the party. To help take the excitement to another level, the shifterkart drivers collectively elected to run the Open Shifter and S2 Semi-Pro categories together, making for a larger field. The decision would not disappoint, providing great racing throughout the day as the two groups fought clean – and ran similar times. Thanks to the fact that the Open Shifter field reached the 10-driver mark on Sunday, SKUSA handed out a $500 check to the weekend winner in the category. Mothers Polish products were awarded to the top driver in each category on the weekend as well, while HPD provided a new top-end kit for the S2 victor. Also on the line were the Midwest ProKart Challenge championships that would be decided by Sunday evening.

Cody Elliott was the class of the Open Shifter category on Saturday. He led the way through the qualifying session to begin round one, posting a 55.812-second lap around the shortened ‘national’ circuit at New Castle. Elliott would win the first 10-lap heat race, and was in the battle for the win in the second moto until contact dropped him down the order. This promoted Joe Ruch to the top, while Elliott was classified sixth. It took just five laps for the Wisconsin driver to make his way back to the front of the field in the main, taking over the lead and running away to a three-second advantage in the 20-lap event. Ruch was shuffled to the tail of the field after lap three, moving Alex Conlin up into the second spot, where he remained. Former karting frontrunner and junior open-wheel formula car pilot Jordan Dick completed the podium in third in his return to action.

Sunday welcomed former ICC national standout David Carmendy, as he joined the field with a bang, recording the fast lap in the qualifying session. A 55.191-second circuit was the best by over a half-second, as Elliott sat second in the order. In the heat races, Carmendy earned both wins, stretching out gaps of five seconds and three seconds over Elliott in each heat race. The first half of the main event saw Elliott put up a fight for the victory. The two swapped the lead during the first six laps of the race before Carmendy settled in as the leader. He would continue to show the way until lap 17 when he suffered a flat tire and retired from the event. This gave the lead and the victory to Elliott, who scored both feature wins and $500 from Superkarts! USA for the overall weekend point total. Dick improved to second on the day, while Tony Malito finished third. 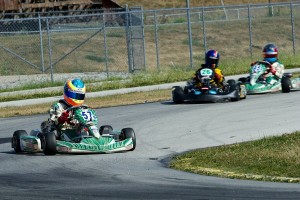 The S2 Semi-Pro Stock Moto category was dominated by Evan Batt. Making a return to the driver’s seat after some time away, Batt drove a borrowed kart to victory both days. On Saturday, Evan beat brother Eric Batt and Tim Hollowell, while Sunday was the same result, as he ran away from Hollowell and Eric.

The season championship in the S5 Junior Stock Moto category went down to the wire between Erik Nelson and Max Nufer. Nelson struck first on Saturday, as he posted a monster lap to secure the top spot in qualifying. Nufer was second, but picked up the pace once racing began. Despite the increase in speed, Nufer was unable to edge out Nelson at the checkered flag in either heat race. The main event saw Nufer earn the holeshot and lead the opening circuit, but Nelson came back the following lap to take the spot, and the two were nose-to-tail the entire time. The victory came down to a photo finish, with Nelson reaching the line first by a scant 18 thousandths over Nufer. Kyle Kennedy was third ahead of Tony Petersen in fourth. Sunday began as a duplicate of the previous day, as Nelson set the pace through qualifying and the two heat races. Nelson led the first half of the main event, when Nufer began to pick up the pressure. On lap 14, Nufer took the lead, which triggered numerous exchanges for the point. At the line, Nufer would beat Nelson to the checkered flags for his first S5 victory of the season, a big win considering the fact that it was his birthday. Nelson settled for second, but earned enough points over the weekend for the class championship. Kennedy would add another third place finish to the weekend, with Petersen ending up fourth. 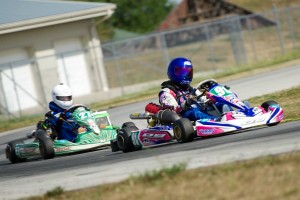 TaG Cadet welcomed another strong group of drivers, including the d’Orlando brothers from New York and Canada’s Roman DeAngelis. Michael and Nicholas d’Orlando set the pace on the day, as Michael led the way in qualifying while Nicholas won the opening heat race. Michael came back to win heat two, but all were joined at the front by Jack Miller and Sam Paley in the feature race. D’Orlando led the first half of the race with Miller right on his bumper. Jamie Williams had worked his way into the mix and the lead at lap nine. Miller then took his turn at the point until the final circuit when the lead group went five wide into the final corner. When the dust settled, it was Paley that moved from fourth to first in the final turn for the victory. Second was Michael d’Orlando, with Nicholas Nufer up to third. On Sunday, Michael d’Orlando was able to walk away from the field throughout the day to record a sweep in his preparation for the SKUSA SuperNationals. Miller was the closest competitor, placing second with Williams in third, Nicholas d’Orlando fourth and Paley fifth, just ahead of Nic Sheppard.

Mick Gabriel ran uncontested in the TaG Senior division on the weekend, winning both feature races. Braden Eves was also a double winner, as he bested the TaG Junior field that featured Tony Petersen – who was running double-duty on the weekend – and David Malukas.

Bryniarski would like to thank all of his competitors and supporters for a successful 2013 season of the Midwest ProKart Challenge and the Midwest Shifterfest. The growth of shifterkart racing throughout the eastern half of the United States is increasing, and Superkarts! USA is looking forward to aiding in that expansion with what should become an annual event in the years to come. For now, the focus turns to the biggest event of the karting season, SuperNationals XVII set for November 20-24 outside the Rio Hotel & Casino in Las Vegas. For more information, visit www.superkartsusa.com