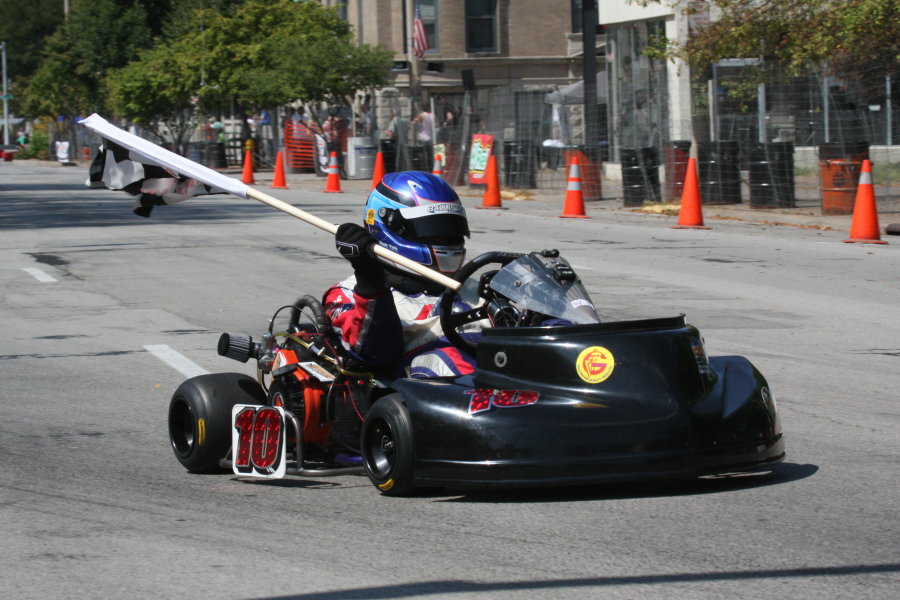 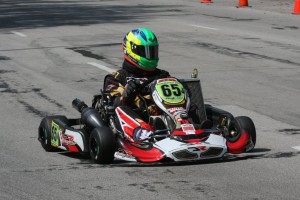 It was a repeat victory for Lance Lane in Masters Shifter
(Photo: Joe Brittin)

It was a weekend of history as the 19th Rock Island Grand Prix completed Sunday. The Quad Cities street race festival saw record temperatures, and records set on-track throughout the two-day event. A number of new fast times were set in the 14 categories offered this year, with a number of drivers making history. Gary Lawson – returning after a year off, added to his all-time win total, taking four feature victories to bring his score to 25. Texan Jordon Musser added a third King of the streets title to his CV. Lance and Josh Lane become the first father/son duo to win at Rock Island Grand Prix, and in the same weekend.

All-time race winner Gary Lawson (Arrow) sat on the LO 206 Medium pole position for the opening category of the event, which also boasted the most entries of any classes on the weekend with 30 drivers on the grid. Away clean from the LeMans start, Lawson led all 15 laps for his first victory of the weekend. Cale Downs (Coyote) ran second, chasing Lawson the entire time to repeat his runner-up finish from a year ago. Defending champ Connor Lund (Arrow) drove fourth, as Canadian Cory Cacciavillani (Birel) improved to third on the day with Matt Pewe fifth. EKN’s Rob Howden and David Cole took part in the event, with Howden up as high as fifth in the early stages but settling back in the eighth position where he began. Cole overcame carburetion troubles in qualifying, earning the hard-charger award driving from 27th to 13th in the 15 lap event. 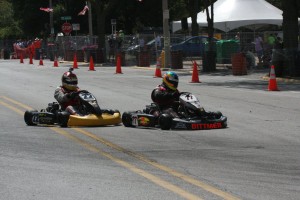 The race and weekend belonged to Lance Lane (DR Kart) in the 125 Shifter Masters category. He was just over three tenths of a second quicker with his fast lap of the race, driving away to a 13-second margin of victory for his second straight Rock trophy. Eric Riggs (GP) finished second, with Eric Chappell (Birel) improving to third after a DQ in qualifying for improper fuel. Chris Shultz (GP) was fourth with Mike Sullivan (CRG) fifth.

Top Kart USA teammates Bill McLaughlin and Blake Deister began the 15-lap Yamaha SuperCan Heavy fight in the top two positions. Through the opening laps, McLaughlin led with Deister getting shuffled out of the lead pack as the Margay group of Todd Bolton, Michael Dittmer and Tony Neilson filled out the lead pack. McLaughlin would get shuffled back to fourth with Bolton out front and Dittmer pushing. Nelison would eventually retire early on lap 12, with McLaughlin losing the top two, setting up for a duel to the checkered flag. On the final lap, Dittmer used lap traffic heading into turn two to pass Bolton for the top spot, and held it to the stripe for the victory, his fifth total in the category throughout the history of the event. Bolton settled for second with McLaughlin getting taken out by a lap kart on the final circuit, moving Deister up to third. Eric Bartsch (Birel) placed fourth with Rock Island’s Brandon Cather (Margay) fifth. 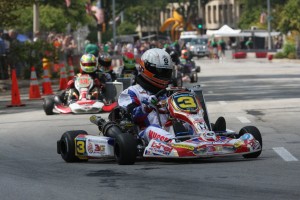 Defending champ Jordon Musser and Connor Iseli made it an all-Texas front row for the 20-lap King of the Streets event. Musser (Birel) grabbed the holeshot as Iseli fell back to eighth by turn one. Putting down solid opening laps on cold Bridgestone tires, Musser established a solid lead as Josh Lane (DR Kart) ran second. EKN #1-ranked driver in Stock Moto – Fritz Leesmann (CRG) – was on the charge early as he worked up to fourth on the opening lap, then took third on lap two from Scott Barnes (GP). Fritz would eventually move to second, finding himself trailing by two seconds to Musser. The 3G Kart Racing driver continued to run qualify-lap pace through the event, never looking back. Leading all 20 laps, Musser would claim his third King of the Streets crown of his career, winning by just over 10 seconds. Lane was able to reel in Leesmann in the closing laps and took second from him. Barnes was a close fourth with Iseli working back up to fifth.

Leopard pole sitter Mason Chelootz (Top Kart) and defending race winner Cory Cacciavillani (Kosmic) were able to break away early at the start of the Leopard event. That would be until lap four when the Canadian made hard contact with the turn five barriers, and put himself out of the race. Chelootz ran solo out front but would be chased down by Alex Nowysz (Margay) and Ocala Gran Prix driver Dustin Stross (Tony Kart). They caught the Top Kart USA driver by lap seven and put the pressure on. Racing for position, contact was made and Chelootz ended up in the barriers and out of the race. Stross moved into the lead but made contact with the barriers as well, allowing Nowysz to take over the lead. The Iowa driver would go on to score his first Rock trophy with Stross holding on with a damaged kart for second. Calvin Stewart (Top Kart) replaced Bill McLaughlin, and came from 11th to third. Drake Ostrom (Exprit) was fourth with Kent Schonberger (Top Kart) winning the battle for fifth. 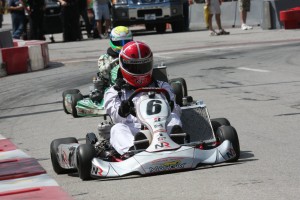 It was a first Rock trophy for Alex Nowysz in Leopard
(Photo: Joe Brittin)

The TaG Junior race was a battle early with some jostling for the lead between pole-sitter Killian Keaveny (Top Kart) and Austin Osborne (Birel). Eventually, Keaveny would secure the position and drive away to a near two-second victory for his first Rock trophy. Osborne ran second with Abby McLaughlin (Top Kart) third and Collum Smith (Energy) fourth.

Clone Heavy feature was the only fight Lawson had in his four wins on the day. From the pole position, he would lead with defending champ Connor Lund (Arrow) and Travis DeVriendt (Coyote) making up the lead pack. They paced the field until reaching lap traffic, when DeVriendt lost the draft and left Lawson and Lund to duel it out for the victory. Lund put Lawson back to second of the first time on lap 10, but Lawson responded the following circuit to reclaim the spot. The two then went side by side through the final two corners to the checkered flag with Lawson winning the drag race to the stripe. At the checkered flags it was Lawson scoring the win by 55 thousandths over Lund. DeVriendt ran third with Jesse Clossey (Coyote) fourth and Jimmy Laswer (Coyote) fifth. 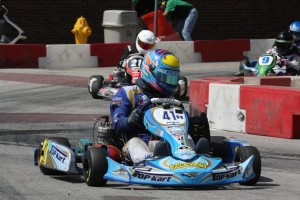 Mason Chelootz (Top Kart) led the TaG Senior field to the green flag but was shuffled all the way back to ninth after the opening lap. Cory Cacciavillani (Kosmic) held the lead with Adam Taylor (Birel) second and Alex Nowysz (Margay) third. Cacciavillani established a solid lead early while eyes were on the charging Chelootz. Up to third by lap 10, Chelootz was looking for a way around Taylor for second until he made contact with the barriers on lap 13. Out front, Cacciavillani scored the victory by over nine seconds, his first in the category. Brennan Harrington (Kosmic) would finish second with Taylor dropping back to third. Morgan Schler (CRG) placed fourth with Davey Hamilton Jr. (Tony Kart) in fifth.

Gary Lawson (Arrow) scored his third win in the inaugural LO 206 Heavy main event. Away from the starting line clean and smooth, he led the field the entire time and established a four-second advantage after 15 laps. Cale Downs (Coyote) won the battle for second over Connor Lund (Arrow). Cory Cacciavillani (Birel) signed up the day of the race, and started shotgun in the 18-kart field. Up to seventh by the opening lap, he spent most of the racing fighting Matt Pewe (Margay) for fourth. At the line, Pewe would secure the position with the Canadian holding fifth. 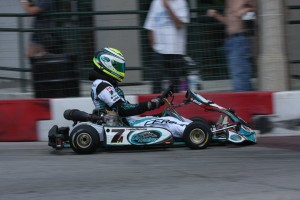 In TaG Masters, it was a battle to see who would become the first three-time winner of the category. Brian McHattie (Exprit) and John Dixon (Top Kart) filled out the front and two ran a clean and exciting opening few laps exchanging the lead. McHattie would eventually take the position and hold it to the checkered flag for his third RIGP victory, and the second to win back-to-back years. Dixon earned fast lap honors but would end up second after 20 laps. Dean Leifheit (Corsa) won the fight for third with Brian Wake (CRG) and Paul Russo (Birel) on his bumper.

Gary Lawson (Arrow) started his fourth race of the day once again from the pole position, this time in Clone Medium. The start was the closest anyone would get as the Ohio driver pulled out to nine second margin of victory for his fourth of the day. The show in the race was watching Connor Lund (Arrow) come from the tail of the field. Breaking his chassis in qualifying, he started 23rd and was 12th by the end of lap one. From there, he advanced forward to the second position, edging out defending race winner Jesse Clossey (Coyote) at the line. Garritt Powell (KSM) was second for much of the race but retired on lap 10. Jimmy Laser (Coyote) was fourth with Travis DeVriendt (Coyote) capping off the top-five. 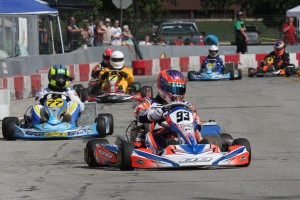 Josh Lane (DR Kart) dominated the return of the Open Shifter category to the Rock. Running similar lap times to what he did in King of the Streets, the longtime RIGP competitor earned his first Rock trophy. Eric Chappell (Birel) added a second place finish to his record with John Meier (Tony Kart) completing the podium.

The race of the day had to be the Yamaha SuperCan Medium. Chase Jones (Top Kart) scored the pole position and was joined by six others in the lead pack. Todd Bolton (Margay) and Tony Neilson (Margay) exchanged the lead through the opening laps until Bill McLaughlin Jr. (Top Kart) locked up in the second spot, pushing he and Neilson away from the pack. Chase, however, gave chase while in third, and by the halfway point brought the group back together. With Jones on his bumper, McLaughlin was able to push past Neilson for the top spot, brining his Top Kart USA teammate with him. The shuffling continued the group slotted for the second position to challenge Jones for the win. On the final lap, Dittmer was running second with Neilson third going into the first corner. Dittmer tried to find a way past Jones, and their exit was rough, giving Neilson room to make it three wide as the drove down to turn two. With the inside line, he was able to hold it through the corner and the final turns to secure the victory, his first in the historic class. Bolton was able to come through to finish second with Dittmer, Jones and McLaughlin rounding out the top-five. 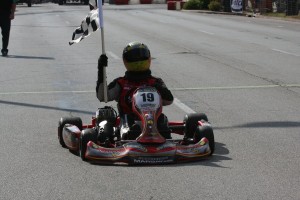 It was a second straight win for Caleb Loniewski in the Pro Open category. Piloting the Lynn Haddock-prepared Margay/IAME monster that has won the last two events, the multi-time RIGP winner kept the perfect score while setting a new track record for the category. Brennan Harrington (Kosmic/Rotax) was second with Travis Porter (Margay/Twin Yamahas) ended up third.

To close out the many prizes and awards given on the weekend, Bondurant School of High Performance Driving gave away two $5,000 4-day schools to two lucky drivers. Yamaha driver Weston Moon and Stock Moto pilot Jenna Grillo were selected for the two awards, presented by Bondurant’s Jesse Dunham – a longtime RIGP competitor and tuner for five-time King of the Streets winner Alan Rudolph.

With the 2013 Rock Island Grand Prix in the books, competitors and their families can look back on what was another historic event. The many volunteers and RIGP coordinators that put all the time and effort to make it the world’s largest street race each and every year are an amazing and loyal group. That passion keeps racers and the many fans along the fence line coming back year after year.